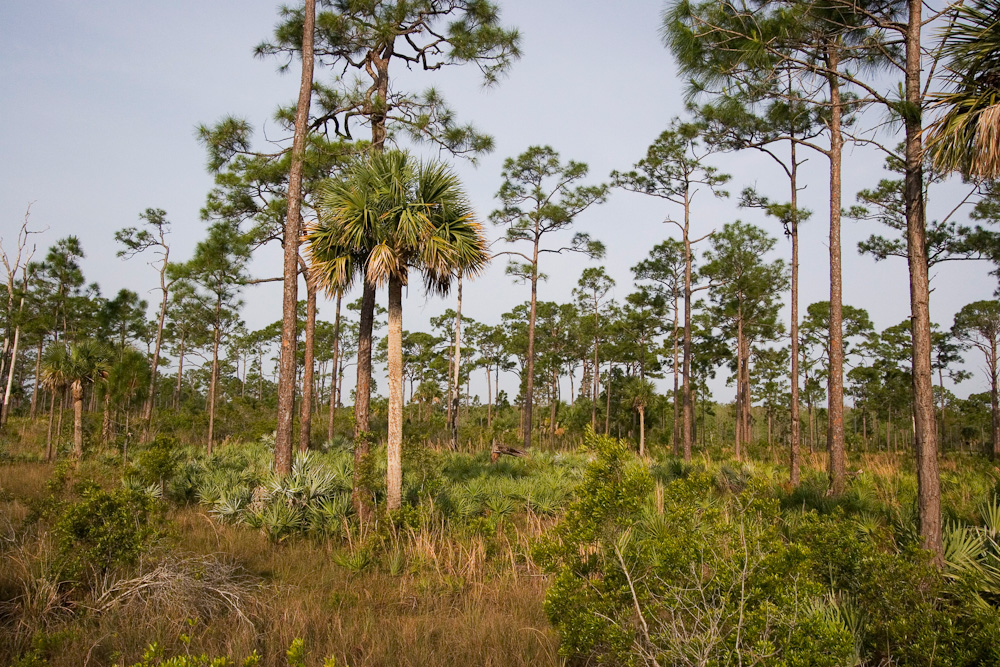 Habitats provide food, water, shelter and space animals need to thrive and reproduce. Corbett is in the transitional zone between the uplands of central Florida and the nearly level Everglades. The most extensive natural communities on Corbett are pine flatwoods, freshwater marshes, wet prairies, and cypress sloughs and domes. Hammocks are found in isolated locations throughout Corbett.

The Hungryland Boardwalk and Trail passes through a sampling of four habitats - cypress swamp, slash pine flatwoods, sawgrass wetlands and hardwood hammock. One hundred seventy acres of old tomato fields are being converted into food plots for deer, hogs, turkey and doves.

Corbett is part of a larger ecosysytem, the Loxahatchee watershed, and includes a portion of the northern Everglades. Historically, water flow across Corbett was disrupted by canals and other water control projects. Today, biologists are working to restore natural water flow and improve wildlife and fish habitat. Regular prescribed burns are also an important management tool.

Invasive nonnative plants are a serious problem on Corbett as they are on many public lands throughout the state. The number one enemy on Corbett is Lygodium microphyllum (Old World climbing fern), followed by Melaleuca and Brazilian pepper.

Lygodium is a thicket-forming, climbing and extremely invasive fern found in swamps, along river banks, wet disturbed sites, pinelands and cabbage palm hammocks in central and south Florida. According to Gil Nelson in The Ferns of Florida, it was rare in Florida just 30 years ago. In 1978 it was found only on a few acres in the eastern third of Martin and Palm Beach counties, but by 1997 had invaded more than 39,000 acres. Biologists and managers on many of south Florida’s public lands, including Corbett, spend much of their time and resources attempting to control this noxious weed. Volunteers at Corbett work to attack isolated patches or to do follow ups after commercial contractors.

In addition to the management work described here, biologists with the Florida Fish and Wildlife Conservation Commission rely on a wide range of techniques to ensure that natural areas throughout the state stay healthy for wildlife and inviting for visitors.