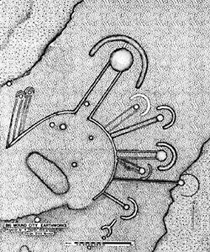 For thousands of years, native people reshaped the local environment by building mounds and digging canals through the sawgrass marsh between villages. Significant archeological sites include Big Mound City and Big Gopher. Big Mound City covers 143 acres and consists of at least 23 mounds, some with radiating causeways and crescent- shaped ponds. Big Gopher is one of the best-preserved earthwork sites in the Lake Okeechobee basin and consists of linear ridges, crescents, mounds and middens.

Hundreds of years after the original native cultures vanished, Seminole Indians sought refuge from the U.S. Army in the swampy Hungryland Slough until starvation forced them to surrender. Later, local ranchers dubbed it the Hungryland.

In 1947, the Game and Fish Commission, predecessor of the Fish and Wildlife Conservation Commission, purchased approximately 52,000 acres from the Southern States Land and Timber Company, naming it after James Wiley Corbett, a former commissioner. The main land use then was harvesting timber and grazing cattle. In the 1960s, 23 miles of canals were dug, changing the water flow surrounding Corbett. By the early 1990s, a marsh restoration project was completed that slowed drainage along the western portion; more work began in the late 1990s to address frequent flooding on Corbett. Culverts were placed in levees, the main canal was cleared of vegetation, and Corbett's discharge permit from the South Florida Water Management District was modified to allow discharge of excess water. The FWC is working with other agencies to develop a plan to better manage water resources on a regional basis from Lake Worth Inlet north to the Loxahatchee River and west to the Dupuis Wildlife and Environmental Area. In 1993, 2,331 acres adjacent to the southern boundary were purchased with funds from the Conservation and Recreational Lands program and leased to the FWC.

The Friends of Corbett is a non-profit citizen’s organization established in 2000 to support the J.W. Corbett Wildlife Management Area and Everglades Youth Conservation Camp, and to promote the importance of this natural area to an increasingly urban population. The Friends meet monthly to plan activities and projects. For more information, or to send your tax-deductible contribution, contact The Friends of Corbett, P.O. Box 16309, West Palm Beach, Florida, 33416-6309.