In addition to deer, turkey and feral hogs that draw human hunters, Corbett provides habitat for many other types of wildlife, including the Bachman’s sparrow and federally endangered red-cockaded woodpecker. The 3,000-acre sawgrass marsh is habitat for the endangered snail kite. Up to 20 pairs of sandhill cranes nest on Corbett during fall and winter.

The best place to view wildlife year-round is the Hungryland Boardwalk and Trail. The 1.2-mile trail is located away from the hunt areas and has interpretive signs describing the plant and animal communities.

Look for white-tailed deer and bobcats in early morning and late afternoon. Pileated woodpeckers and barred and screech owls forage in the cypress dome. River otters and raccoons are sometimes seen near the boardwalk. Look for herons, egrets and common yellowthroats in the marshes. Listen as you walk, red-shouldered hawks are commonly heard.

Check the oak hammocks and cypress for large numbers of migratory warblers in spring and fall. The L-8 Canal is a great birding spot: look for roseate spoonbills, wood storks, ibises, tricolored herons, great blue herons and other wading birds.

The roseate spoonbill has pink feathers with a red strip on the shoulder and an orange tail. The pink color results from its diet of shrimp, small fish, snails and aquatic insects. Audubon discovered these exquisite birds while searching for nonexistent flamingo nests in the 1830s. The roseate spoonbill is sometimes confused with flamingo, another rare wading bird. However, the greater flamingo has a short, thick, bent bill while the spoonbill has a distinctive, wider shape. This discriminating bill has sensitive nerve endings that help the spoonbill detect prey as it sweeps its head from side to side.

Like egrets and many other wading birds, the spoonbill almost became extinct as the result of plume hunters. Ironically, pink spoonbill feathers were not highly sought after, because they faded quickly. However, large numbers of egrets and spoonbills shared colonies where plume hunters were indiscriminate, and the disturbance caused many birds to abandon their nests. Although numbers have increased, the roseate spoonbill is still threatened, primarily by habitat loss and is listed as a species of special concern by the Florida Fish and Wildlife Conservation Commission. 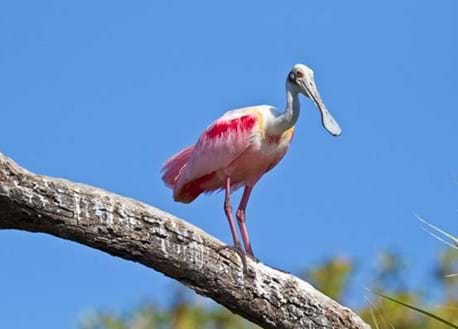