Wood storks, white bises, great blue herons, snowy egrets and cattle egrets occur year-round. Watch for swallow-tailed kites and a variety of migratory birds in the spring and summer and an influx of waterfowl in the winter. Songbirds are found throughout the western forested boundary of the area. The area is also occasionally visited by black bear and the endangered Florida panther.

Check out other species recorded from Holey Land WMA, or add observations of your own, by visiting the Holey Land WMA Nature Trackers project.

The American alligator is one of the most commonly seen wildlife species in Florida. Alligators and other crocodilians are the only living Archosauria, the ancient group that included dinosaurs. They have many features more similar to birds or mammals than to other reptiles. The snouts of alligators are broad and rounded, whereas those of the much rarer crocodile are longer and more pointed.

Alligators play a key role in the Everglades and other wetlands. During times of drought they dig holes that fill with groundwater. These alligator holes are an important source of freshwater for birds and mammals during the dry season and are critical to the survival of many aquatic species. Since 1988, the Florida Fish and Wildlife Conservation Commission has held a public waters alligator harvest. Each year Alligator Harvest Management Units, including the Holey Land WMA, are established with conservative harvest quotas. 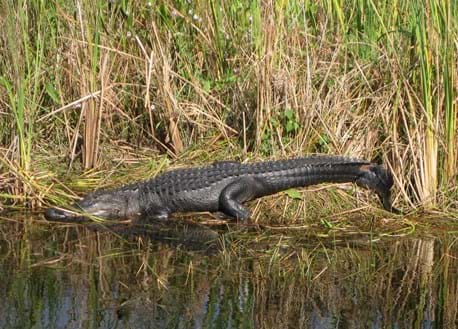