The Florida panther is one of the smaller cougar species in the Western Hemisphere.  There are currently only 100-160 Florida panthers left in the wild.  Adult males can reach a length of seven feet (2.1 meters) with a shoulder height between 24-28 inches (60-70 centimeters), and an average weight of 116 pounds (52.6 kilograms).  Females are smaller, as they only reach a length of up to six feet (1.8 meters) and a weight of 75 pounds (34 kilograms) (Roelke 1990).  Adult Florida panthers have a reddish-brown back, dark tan sides, and a pale gray belly.  Kittens have a gray colored body, with black or brown spots, and five stripes that go around the tail.  Panthers are never black in coloration (melanistic) (U.S. Fish & Wildlife Service 2008).  Some Florida panthers have a crook at the end of the tail, which is thought to come from inbreeding.  In males, one descended testicle is also thought to come from inbreeding.  This species has a dorsal cowlick and white specks on its fur, which are thought to occur due to tick bites.

Cougar adults are a uniform tan color with lighter fur on their lower chests, belly, and inner legs. Shades of individual animals may vary considerably from grayish to reddish to yellowish.  This uniform color conceals them effectively in a variety of settings including the open range. 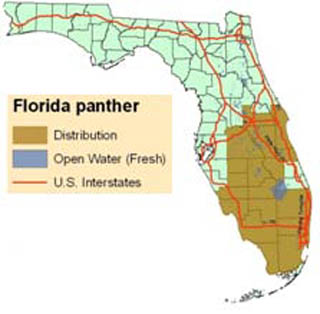 Florida panthers inhabit large forested communities and wetlands (Florida Natural Areas Inventory 2001).  They can be found in South and parts of Central Florida, although male panthers have been documented as far north as Central Georgia.

Panthers are solitary, elusive animals and are rarely observed in the wild. Since 1981 scientists have fitted many Florida panthers with radio collars to help keep track of their movements. Still, much of what we know about panthers comes from what they leave behind: tracks, scrapes, scratches, scat (feces), and prey remains.

Florida panthers are carnivores (feed only on meat) and their diet consists primarily of deer, raccoons, wild hogs, armadillos, and rabbits.  Large carnivores require large areas to roam.  Florida panther home ranges average 75 and 150 square miles (194.25 and 388.5 square kilometers) for females and males, respectively.  There is some overlap amongst home ranges, particularly for females, but males are typically intolerant of other males.

Florida panthers are solitary in nature, except for females with kittens, and they do not form pair bonds with mates.  Females express their sexual receptiveness by the scent of their urine and through vocalizations.  The total gestation time is 92-96 days with one to four kittens being born per litter.  Births occur throughout the year, but mainly occur in late spring.  Dens are usually created  in a palmetto thicket.  Females do not breed again until their young are 1.5-2 years old.  Females reach sexual maturity at 1.5 to 2.5 years old, while males reach sexual maturity around three years old.

Female panthers have a higher survival rate and therefore tend to live longer than male panthers.  Ages at death average 7.5 years for females and just over five years for males.  The oldest known wild panthers were 20 and 14 years old at death for a female and male panther, respectively.

During the 1800’s and early 1900’s, habitat loss and hunting led to the panther’s near extinction.  Panthers were hunted and killed by settlers for sport or to protect livestock.  During this time, there was an anti-predator sentiment and panthers were killed out of fear.  By the mid 1980’s, only 20-30 panthers could be found in the wild and this small population was found to be highly inbred.  A plan to restore the genetic health of Florida panthers was implemented in 1995.  Genetic restoration involved the release of eight female pumas (Puma concolor stanleyana) from Texas in 1995 into available panther habitat in South Florida.  The Texas subspecies was selected for this project because they represented the closest puma population to Florida, and historically, the Florida panther subspecies bordered the Texas population and interbreeding occurred naturally between them.  Exchange of genetic material between the two subspecies ceased as habitat in the southeastern U.S. became fragmented in the late 1800’s and throughout the 20th century.  Five of the eight Texas females reproduced successfully, resulting in a minimum of 20 kittens.  By 2003, the last three surviving Texas females were removed from the wild Florida population; no Texas pumas remain in the wild in Florida today.