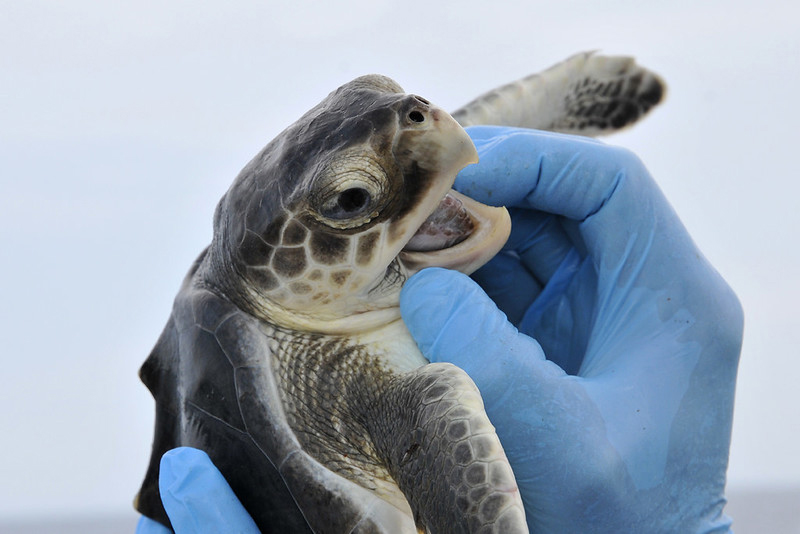 Illegal harvesting, habitat encroachment, and pollution are only some of the things sea turtles must fight against to stay alive. Researchers at FWRI are studying these threats and finding ways to help the population survive.

An Overview
This excerpt of the sea turtle Sea Stats publication describes the obstacles sea turtles face throughout their lives, including habitat destruction and poaching.

Fibropapillomatosis and Its Effect on Green Turtles
A high percentage of turtle strandings have been attributed to a disease that causes tumors to cover a turtle's body and impede their vision, mouth, and movement.

Tar and Trash Invading Sea Turtle Habitats
An alarming amount of litter and tar is collecting in the frontal zones where baby sea turtles spend the early years of their lives. Stash the Trash and help to protect sea turtle hatchlings.

The Hazards of Beach Furniture to Turtle Nesting
The Sea Turtle Conservation League of Singer Island put together this information and took photographs documenting the threat a simple lounge chair can cause.

Rescuing Oil-Impacted Turtles: A Photo Set on Flickr
FWRI biologists and commercial charter boat fishermen teamed up to help rescue oil-impacted sea turtles in the northern Gulf of Mexico in 2010.

January 2010 Cold-Stunning Event
The unusually long spell of cold weather in Florida in January 2010 had a big impact on sea turtles. The FWC worked with staff from county, state, and federal agencies as well as numerous volunteers on a mass rescue effort for sea turtles throughout the state.