With help of people in Brevard County, STPS, a sea turtle conservation group headquartered in Melbourne Beach, collected approximately 8,000 stranded hatchlings from the beach between 7 and 13 August 2003.

Cold-water upwellings occasionally occur on the east coast of Florida, but this summer the upwelling was much stronger than in previous years. Water temperatures in August were as low as 59° F in Brevard County. This abrupt water temperature change caused many emerged sea turtle hatchlings to become lethargic as they entered the ocean. The hatchlings were incapable of swimming through the surf and washed back onto shore. During several days in mid-August, thousands of live, cold-stunned hatchlings were strewn over Brevard County beaches. The majority of collected hatchlings were released in St. Lucie County where the water temperature was higher. Less active hatchlings were taken offshore by boat and released off Volusia, Brevard, and Palm Beach counties. STPS played an indispensable, coordinating role in this event. Their conservation dedication is greatly appreciated by FWRI's sea turtle research group. Thank you, Sea Turtle Preservation Society! 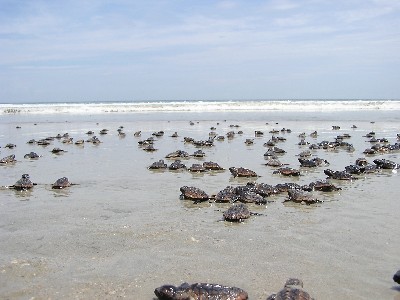