Fibropapillomatosis and Its Effect on Green Turtles

Fibropapillomatosis (FP) is a debilitating disease that affects sea turtles in Florida and many other parts of the world. Turtles with FP have external tumors that may grow so large and hanging as to hamper swimming, vision, feeding, and potential escape from predators. These lesions have been reported in all sea turtle species except in leatherbacks (Dermochelys coriacea). For an unknown reason, the frequency of FP is much higher in green turtles (Chelonia mydas) than in other species.

Based on information from the Florida Sea Turtle Stranding and Salvage Network (STSSN) database, 22.2 percent of dead or debilitated (i.e. stranded) green turtles (sample size=6027) found in Florida between 1980-2005 had FP tumors. FP prevalence is low among strandings of Kemp's ridleys (Lepidochelys kempii), and loggerheads (Caretta caretta) in comparison to the rate of FP in green turtles. FP prevalence in Kemp's ridleys and loggerheads between 1980 and 2005 were 0.2 percent (sample size=1,698) and 0.1 percent (sample size=15,237) 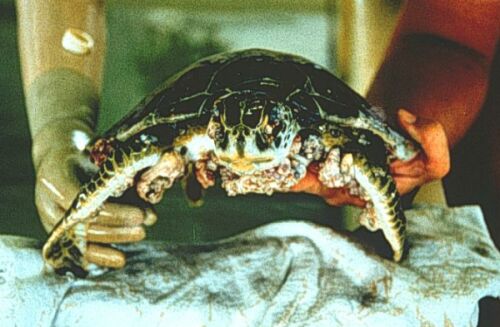 The history of FP in Florida dates back to at least 1938, when FP was reported in green turtles that were captured in the Florida Keys. This mysterious disease has now been observed in all major oceans. Although the cause of FP is still not fully understood, a leading suspect is a virus. There are only five facilities in Florida where these papilloma-type tumors are surgically removed from sea turtles. The survival rate of green turtles after surgery is over 90 percent. 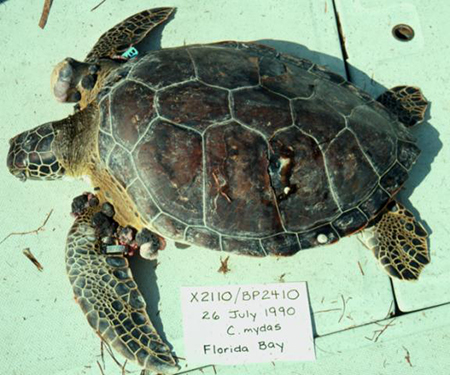 The appearance of FP tumors varies from smooth to cauliflower-like with small spiky projections. The tumors arise mostly on a turtle's soft skin tissue, around the neck, at the base of flippers, and near the eye. They are occasionally found at the seams between scales on the shell and plastron, which is the ventral or lower area of the shell. The color of tumors can be white, pink, red, gray, purple or black. The size of the tumor varies from less than the size of a pea to larger than a grapefruit. The number of tumors per turtle can be as many as 70. A large mass of tumors can interfere with normal swimming and feeding. Blood analyses have indicated that turtles with many tumors are typically anemic. However, there were no differences in blood parameters between non-diseased and mildly afflicted green turtles with small amounts of tumors on their bodies.

Biologists are continuing to collect data and tissue samples in studies of FP at hotspots for the disease such as the Indian River Lagoon, Lake Worth Lagoon, Mosquito Lagoon, Florida Bay, and the Florida Keys. In cooperative research facilitated by FWC, veterinarians, immunologists, and pathologists are working to understand what causes this mysterious disease.