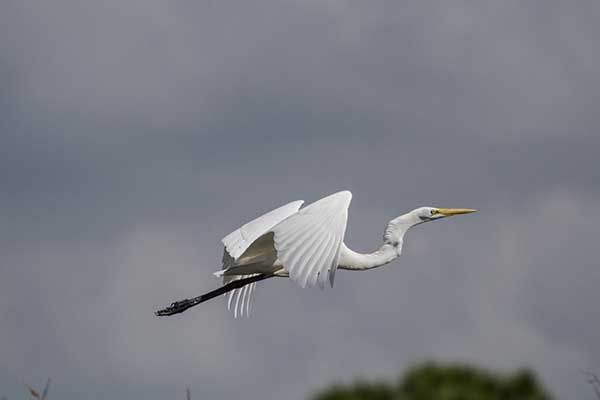 The river otter is as suited to the water as squirrels are to life in the trees. Its glossy, brown-furred body is sleek and streamlined. An otter can paddle along the water surface with the aid of short powerful legs and webbed feet or turn on the speed with thrust from its long, muscular tail. An otter can remain underwater for nearly four minutes.

Otters do not migrate seasonally but may move locally depending on water levels and food availability. They rarely construct their own dens, but will take over bank burrows abandoned by beavers or will find shelter in hollow trees or logs or under tree roots. Though mainly nocturnal, it’s not unusual to see otters during the day.

Otters were once abundant throughout North America, except for the arid southwest and the very frigid north. Like the beaver, the otter was trapped for its thick, dense fur. During the 19th century, overharvesting and habitat alteration eliminated the otter from parts of its former range. Harvest limits and reintroduction efforts have helped the population recover and it is considered to be stable now.

In Florida, otters are found in rivers, streams, lakes, ponds and marshes throughout the state, except the Keys. Favorite foods are crayfish and fish, but otters also feed on frogs, salamanders, snakes, snails, turtles and other small prey. Otters have no natural enemies except for humans and alligators. Many die as roadkills.