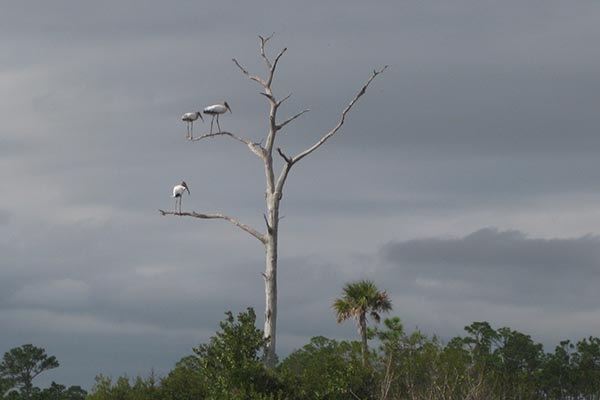 Native Americans utilized this site dating back to the time when mastodons and bison roamed the prairies of central and southern Florida. Like visitors in the present, they hunted and fished the plentiful game species. Once European explorers arrived, these original cultures were doomed from introduced diseases and outright killing. Later, in the mid-1800s, Seminoles seeking to escape the U.S. Army hid out in these wetlands. The Army destroyed and cut off their food supplies, leading local ranchers to refer to the region as “Hungryland.” The slough that still runs through the area was called the Hungryland Slough and was primarily used for grazing cattle.

In the late 1960s the area currently known as Pal Mar, of which the Jones/Hungryland Wildlife and Environmental Area is a part, was the focus of a real estate scheme. Developers sold several thousand residential lots, mainly to out-of-state buyers. Deep canals were cut in an attempt to drain the property for development. Because the developers had failed to file the proper plans, Martin County filed a lawsuit that put an end to drainage. Prior to state acquisition, the citizens of Martin and Palm Beach counties regarded the land as a conservation area, and the Martin County Conservation Alliance and other conservation groups conducted interpretive tours across the property. The land was purchased in 1994 and 1997 under the Save Our Rivers program and in 1999 under the Conservation and Recreation Lands Program.

The WEA honors the conservation legacy of Johnny and Marianna Jones, passionate advocates for the protection of fish and wildlife resources throughout Florida. During their 61-year marriage, the couple lobbied for environmental issues, were leaders of the Florida Wildlife Federation and were instrumental in the establishment of over 3 million acres of public lands, including the John C. and Mariana Jones/Hungryland WEA.