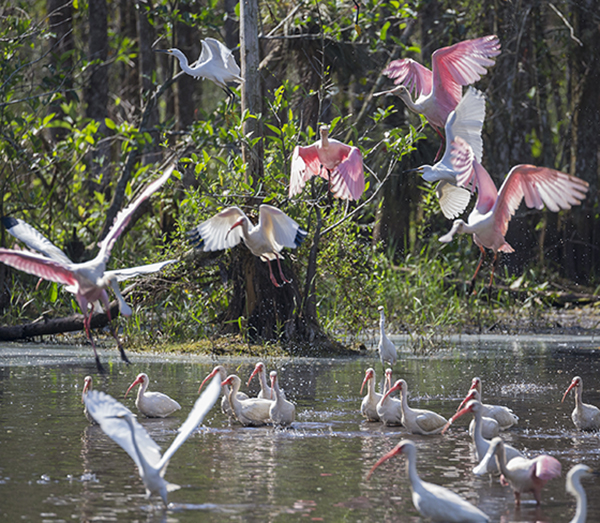 When brush is high along levees, opportunities for wildlife viewing may be limited, except for visitors with airboats and tracked vehicles. Wading birds and raptors are common on the area. The best time to see birds is in February near recreational areas along I-75. The endangered snail kite as well as many other birds can be seen year-round from Tamiami Trail at the Miccosukee Restaurant (L67), at 40-Mile Bend and other boat ramps. Although not common residents, the Florida black bear and the endangered Florida panther and are occasionally found on the area.

The Everglades is home to many wading bird colonies, including one of the largest in the nation. Roseate spoonbills and nesting pairs of wood storks are among the many species of wading birds found throughout the area. In the spring months, birds tend to concentrate around the last remaining pools of water.

The snail kite feeds almost exclusively on freshwater apple snails, extracting them from their shells with its slender, curved bill. This raptor is common in many parts of South and Central America, Mexico, and Cuba and once ranged throughout Florida. Today the snail kite’s North American distribution is limited to freshwater marshes of central and south Florida and is listed as endangered by the U.S. Fish and Wildlife Service.

By the 1960s, decades of draining the snail kite’s marsh habitat reduced the Florida population to no more than 25 individuals. The snail kite population has since rebounded. Estimated at approximately 700 individuals in the 1900s, the population increased to 1,754 in 2014.

The snail kite is also a good indicator of water quality. Increased nutrients, especially phosphorus from agricultural runoff, result in growth of dense stands of cattails and water hyacinth. Snail kites require relatively open water to see the apple snails and are unable to forage successfully in dense vegetation. Increased nutrients may also have detrimental effects on the apple snails themselves by decreasing oxygen levels in the water. 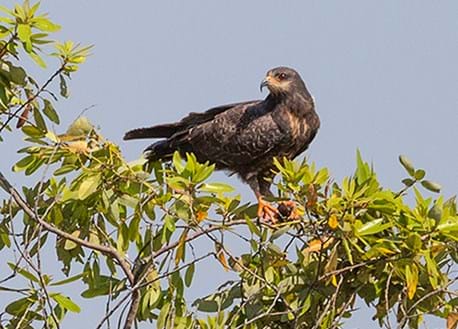