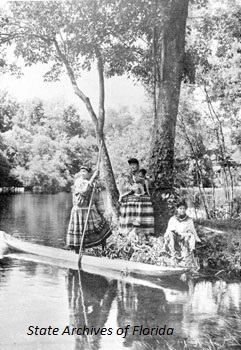 Only a century ago the southern third of Florida was an unwelcoming wet wilderness. Lake Okeechobee was nearly twice the size it is today and water crept slowly southward from this grand lake down the peninsula through seemingly endless swamp and sawgrass. Rainfall that didn’t seep through to the underlying limestone sat on the nearly flat land. The only dry areas were on the Atlantic coastal ridge and the Everglades hammocks.

Native Americans inhabited south Florida even before wetter climatic conditions set into motion the beginning of the Everglades 5,000 or so years ago. At the time European explorers arrived in the 1500s, Native American cultures were well established, and people lived by hunting, fishing and gathering wild foods. Villages around Lake Okeechobee may have grown corn, at least for a time. Most of the Native American population was settled in villages near estuaries and on the coastal ridge. People traveled from these villages back and forth to camps in the Everglades to hunt and fish, much as modern urban dwellers continue to do today.

By the mid-1700s, the original Native American cultures encountered by European explorers were gone, their members killed, enslaved or dead from diseases to which they had no resistance. A new group of Native Americans, a few hundred Seminoles and Miccosukees, escaped to south Florida at the end of the Second Seminole War in 1842. They established small settlements on the tree islands, and hunted, fished, gardened and collected wild foods. They plied the waterways in cypress canoes, and toward the end of the 19th century began trading alligator hides and egret feathers (desirable commodities in the world of women’s fashions), for sewing machines and other goods. Today the Miccosukee Tribe, recognized by the federal government in 1961 as a group separate from the Seminoles, has perpetual lease control over 189,000 acres within the management area and continues to use the land for camps, religious rituals, and subsistence hunting and fishing. 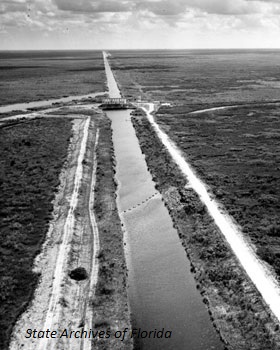 In 1948, Congress authorized the Central and South Florida Project to protect agricultural and urban areas from flooding and to serve as a source of fresh water for what was fast becoming the heavily populated Gold Coast. The project entailed construction of three water conservation areas, two of which (Water Conservation Areas 2 and 3) are now encompassed by the Everglades and Francis S. Taylor Wildlife Management Area. Construction of canals, levees and water control structures began in 1949 and was completed in 1962. Water Conservation Areas 2 and 3 are almost completely enclosed by a levee and canal system that is approximately 150 miles in length. The only portion of the area not enclosed by the levee system is WCA3A where a seven-mile section of the western border remains hydrologically connected to the Big Cypress Preserve. The U.S. Highway 27 separates WCA2 from WCA3, U.S. Highway 41 (Tamiami Trail) borders WCA3, and Interstate 75 bisects WCA3. These roads, in combination with the existing levee and water-delivery system, have altered the natural hydroperiods and disrupted sheet flow throughout the management area. Water is impounded in the WCAs by the levee and canal system, and water flow into and out of the WCAs is regulated by water control structures and regulation schedules. Continued development to the east of the management area will likely intensify environmental problems. In addition to fish and wildlife habitat and recreation, the area is used for flood retention during high rainfall years and as a reservoir for urban and agricultural use during dry years.

The Everglades Forever Act was passed in 1994 to continue efforts to address environmental concerns related to quality, quantity and timing of water entering the Everglades. The FWC, U.S. Department of the Interior, the Florida Department of Environmental Protection and the South Florida Water Management District are among the state and federal agencies that work towards restoration efforts for the Everglades.