Habitats provide the food, water, shelter and space that animals need to thrive and reproduce. Diverse natural communities provide habitat for wildlife at Platt Branch WEA and include well-managed pine flatwoods, scrub, cutthroatgrass seeps, and wetlands such as depression marshes and floodplain swamps. These habitats support a remarkable diversity of wildlife, including protected species such as the gopher tortoise, fox squirrel, Florida scrub-jay and red-cockaded woodpecker.

Wet flatwoods are the predominant habitat at Platt Branch and cover 68 percent of the WEA. The majority of the pine flatwoods are mesic flatwoods, which feature old-growth longleaf pines at the southern limit of their range, and an understory of palmetto and wiregrass. Few examples of this habitat remain in southern Florida. Another major flatwoods community is called cutthroatgrass seep, a wetter habitat associated with seepage slopes and drainage swales from surrounding ridges. Restricted to just a few counties in central Florida, cutthroatgrass grows beneath slash pine at this WEA. Other rare plants include Edison’s St. John’s wort, giant orchid, scrub pinweed and wild coco. 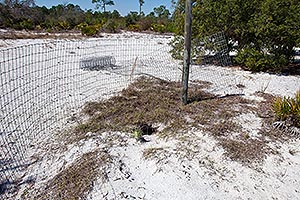 In mature flatwoods, regular prescribed burns help to control hardwoods in the midstory and encourage the flowering and abundance of grasses. Areas with naturally regenerating pines, such as flatwoods that were previously timbered, are thinned and managed with prescribed burns. Cleared pastures with scattered pine trees are managed to reduce the growth of wax myrtles and other shrubs and to encourage the spread of pines. Scrub habitat is maintained with periodic fire. The natural colonization of oaks into pastures that were formerly scrub is managed with periodic fire and mechanical methods to restore the open aspect of the canopy and bare ground necessary for foraging and acorn caching by scrub jays.