The loop trail offers pleasant hiking through several of the dominant plant communities. Florida scrub-jay and gopher tortoise are common in the oak scrub. Seasonal wetlands host ibis, egrets, herons, wood storks and Florida sandhill cranes. Check ponds for wood ducks and mottled ducks. Watch for deer, turkey and fox squirrels in the pine flatwoods. Hike service roads to the western side of the area to reach the mature pine flatwoods where the federally endangered red-cockaded woodpeckers occur. Cavity trees are marked and are easy to spot. During the April to July nesting season, keep 70-80 feet (the length of a semi-trailer) from these trees. Open areas, such as former pastures, attract southeastern kestrels, Florida sandhill cranes and northern harriers during the winter. Although the animal is rarely seen, you are likely to come upon sandy mounds made by the southeastern pocket gopher.

True to its name, the Florida mouse is found nowhere else in the United States. Considered fairly large, as mice go, this Florida rodent is seven to eight inches long from nose to tip of tail. It also has relatively large ears and hind feet, compared to other species of mice. Fur on the upper side of the body is tawny or brownish, with buff-colored (golden brown) patches on the shoulders and lower sides, while the feet and underside of the body and tail are white.

The Florida mouse is found in sandy upland habitats such as scrub or sandhill. It occurs in peninsular Florida from the north central portion of the state, south to Highlands and Sarasota counties and along the Atlantic coast from St. Johns to Palm Beach counties. The species has a spotty distribution, which results from its need for specific upland habitats, much of which have been lost to development. Population size can vary considerably, but typically is larger on larger sites with higher quality habitat. 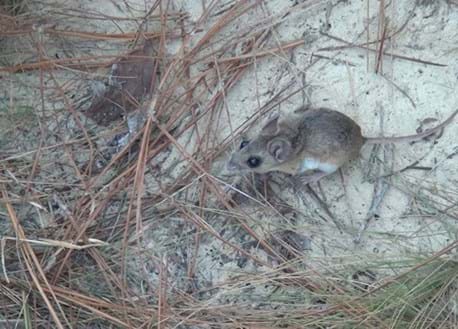