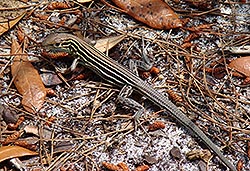 The best wildlife viewing is along the hiking trail and powerline right-of-way, which afford year-round observation of protected species such as gopher tortoises, southeastern American kestrels and Sherman’s fox squirrels. The Florida mouse, gopher frog and indigo snake, three protected species usually found in association with gopher tortoises, have been observed at Perry Oldenburg.

In addition to the gopher tortoise, reptiles such as the southern fence lizard, six-lined racerunner, southeastern five-lined skink, pine snake, southern black racer and eastern diamondback are regularly observed. The power lines provide good perches for red-shouldered and red-tailed hawks, southeastern American kestrels, eastern bluebirds and loggerhead shrikes. Check the right-of-way and other open areas for white-tailed deer and wild turkey. The southeastern pocket gopher leaves small sandy mounds in open areas or in the sandhills. Check the oak hammock during the spring and fall for migratory warblers. Fall wildflowers attract a variety of butterflies.

The seven species of woodpeckers that reside year-round in Florida are joined in the winter by the yellow-bellied sapsucker, a woodpecker similar in size to the red-cockaded. Despite its name, the belly feathers of the sapsucker are barely yellow while the bird is in its winter plumage in Florida. The easiest way to identify this species is to look for a broad, white wing patch. From a distance, the patch looks like a distinctive white stripe on the bird's side.

Long after sapsuckers have flown north in the spring to breeding grounds in the northern U.S. and Canada, evidence of their winter occupation in Florida is evident in many deciduous forests. If you've noticed lines of small holes encircling the trunks of living trees, you've seen the sapsucker's handiwork. Sapsuckers drill small holes, in horizontal lines, through the outer bark to stimulate sap flow. They eat the inner bark, lap up the oozing sap and eat insects trapped in it. Sapsuckers return to the same trees over and over again and will defend their food source from other birds and small mammals attracted to the sap wells.

On their breeding grounds, yellow-bellied sapsuckers often reuse the same nest tree, but excavate a new cavity every year. Abandoned cavities provide critical habitat for many other cavity nesting species including bluebirds, chickadees and flying squirrels and underscore the importance of leaving some dead and dying trees in the landscape. 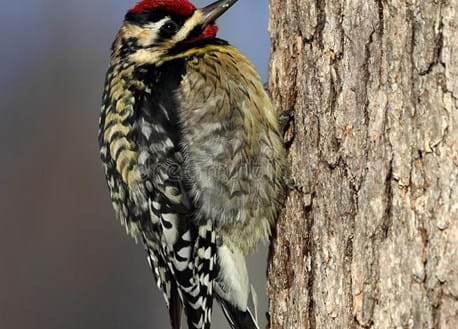