The Southeastern American kestrel is the smallest falcon found in the U.S.  This species of kestrel has a brownish back (dorsal) area with black flecking, a white belly (with males having less dark speckles on it), and black marks extending from the eyes downward.  The colors of their wings differ by gender, as males have bluish-gray wings while females have brown wings.  They also have a high pitched call during flight, which sounds like “klee-klee-klee” and “killy-killy-killy”.

As engaging a bird as you'll ever see, the kestrel is the smallest and most common of the falcons.

The back and tail of the kestrel are russet, the wings blue-gray. Two lines of onyx tears mark the sides of its white face. 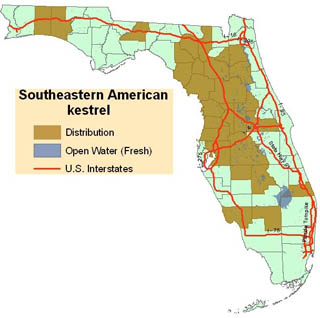 American kestrels nest in cavities that they do not excavate. Instead, they must depend on woodpeckers and natural processes to create holes in trees. Kestrels nest predominantly in dead but standing longleaf pine trees, called snags, usually in the abandoned cavities of pileated woodpeckers.

The Southeastern American kestrel’s habitat in Florida includes open woodlands, sandhill, and fire maintained savannah pine habitats.  However, it will also use alternative habitats which include pastures and open fields located in residential areas.  Within these habitats, kestrels will nest in cavities excavated in large dead trees by woodpeckers.  Nest boxes are also used by kestrels, which have become an important artificial habitat for the kestrel due to the loss of primary habitats.  Any of the habitats used by kestrels must be able to support their nesting and ability to prey on potential food efficiently.  The Southeastern American kestrel can be found throughout Florida, while also being found remotely in the coastal plains of Louisiana, Georgia, and South Carolina.

American kestrels often perch on telephone wires at the edge of a field or other open area. From this vantage they hunt for insects (especially grass-hoppers and dragonflies), lizards and small mammals. Sometimes they are seen hovering like helicopters above their prey.

Kestrels nest between mid-March and early June, raising about four chicks during a season. However, kestrels are short-lived birds. For those surviving their first winter, life span averages between 2.3 - 2.8 years.

Loss of nesting snags, especially longleaf pine, appears to be the main reason for the decline. In addition, since kestrels avoid pine plantations and hardwood stands, the loss of open foraging habitat has been a contributing factor.

Breeding begins in March and concludes in June.  Females will lay three to five eggs on average in one breeding season.  Eggs are white and reddish-brown, with dark speckles.  Incubation takes one month and the chicks require another 30 days before they are capable of leaving the nest.

The Southeastern American kestrel has a low life expectancy in the wild, only averaging 15 months.  The survival rate of its first year of life can be as low as 30%, while the rate increases to 50% after the first year.  Increased predation and collisions with motor vehicles are some of the reasons for the low survival rates for the subspecies.  Unlike the kestrels that breed in the rest of North America, the Southeastern American kestrel is a non-migratory subspecies.  It lives year-round in Florida and is fairly sedentary, with short dispersal distances.

The main threat to the Southeastern American kestrel is the loss of nesting and feeding habitat.  These habitats are destroyed during the development of new residential areas and farm lands, removal of trees in agriculture fields, and the alteration of fire-maintained pine habitats by suppressing fire.  Kestrels are also vulnerable to pollutants such as PCBs (polychlorinated biphenyls), DDT (dichlorodiphenyltrichloroethane), and heavy metals.  Other potential threats include increased predation, collisions with vehicles and aircraft, and the West Nile Virus (Bird 2009, Deem et al. 1998, Smallwood and Bird 2002).

The Southeastern American kestrel is protected by the U.S. Migratory Bird Treaty Act and as a State-designated Threatened species by Florida’s Endangered and Threatened Species Rule.