Active wildlife management practices combined with a diversity of natural communities make Guana River an excellent place to view wildlife, especially birds. During April and October, especially with a west wind or after a cold front, this is the best place in Northeast Florida to see peregrine falcons. More than 3,000 migratory ducks, American coots, common gallinules and pied-billed grebes winter at Guana Lake.

White pelicans (January and February), ospreys and bald eagles often fish at the impounded lake. Look for black-necked stilts, yellowlegs, dowitchers and other shorebirds at the lake’s north end when water levels are low.

At Big Savannah and other ponds, especially May through September, you are likely to see wood storks, roseate spoonbills, and white and glossy ibis. The Guana Dam and the tower on Hammock Road are excellent spots to photograph and observe birds.

Agility, speed, power are fitting adjectives describing the flight of the peregrine falcon, the world’s fastest bird. This skillful hunter, famous for its ability to snatch birds right out of the sky, has awed many a bird watcher fortunate enough to witness its “stooping” flight, the term used to describe this bird’s steep downward plunge, with wings partially closed, at speeds that can exceed 150 mph. Such deadly stealth is effective on doves, shorebirds and ducks, the peregrine’s favorite prey.

Just as spectacular has been the peregrine’s comeback from severe population declines resulting from the widespread use, beginning in the 1940s, of pesticides such as DDT. At one point, the species was no longer found east of the Mississippi, and populations in the west had declined by as much as 90 percent. Currently, only the subspecies Arctic peregrine falcon is listed as an endangered species.

Peregrine falcons do not breed in Florida, but like many northern breeders, some spend the winter here. Spot them during spring and fall migrations as they move between northern breeding grounds and wintering areas in Central and South America. A good place to watch for them in fall or winter is over open terrain, particularly coastal shorelines and wetlands.

As your eyes scan the skies for interesting birds, distinguish the peregrine falcon by its typical falcon silhouette -- long, pointed wings and long, thin tail -- and by the dark feathers on its head and nape, which resemble a hood or helmet. A distinctive black wedge extends below the eye. 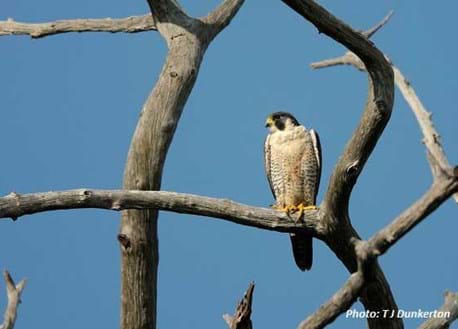