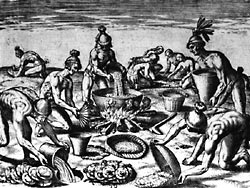 Early inhabitants once thrived in the land between the Tolomato River and the Atlantic Ocean, where they hunted, fished, and collected large amounts of shellfish, evident from the shell middens in the area. A huge shell ring of oyster, clam, conch and coquina, likely the foundation of an early circular village, also was discovered in the area by archaeologist. 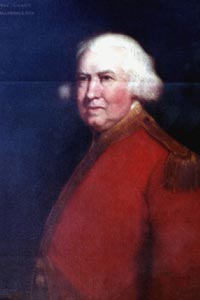 When Europeans arrived in the sixteenth century, they found villages surrounded by fields of corn, beans, peas, squash and pumpkins. Known to Europeans as Timucuans, these Native Americans were immortalized in the drawings of Jacques Le Moyne de Morgues who accompanied the Frenchman Rene de Laudonniere to Florida in 1564. Many land grants were recorded for what now forms the Guana River WMA. In the 1770s, British Governor James Grant operated an indigo plantation on the southern tip of the peninsula. Later, the land supported a rice crop, cattle, hogs and sugarcane. A network of dikes, levees, and ditches were constructed for milling rice and sugar.

Canals were dug along the northern portion of the Tolomato River for the northern expansion of the Atlantic Intracoastal Waterway in the early 1900s. In the 1920s, real estate investors and developers began to consolidate these tracts for a residential community, but their plans ended with the Depression. An intense pine harvest began in the late 1930s and continued through the 1970s. Between 1931 and 1980, impoundments were constructed for waterfowl hunting. Lake Ponte Vedra was created between 1957 and 1962 to increase and to enhance habitat for waterfowl by damming the river and installing water control structures.

In 1984, the land was purchased by the state through its Conservation and Recreation Lands (CARL) program, and Guana Tolomato Matanzas National Estuarine Research Reserve and Guana River Wildlife Management Area were established.