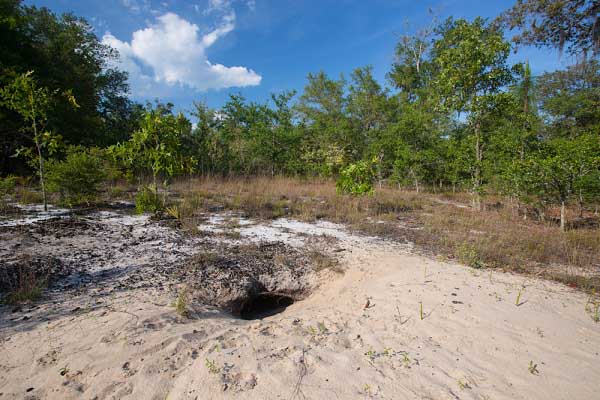 The loose, sandy soils of the longleaf pine sandhills are easily excavated by gopher tortoises; look for mounds of sand that mark the burrow entrance. A number of other sandhill residents find refuge within the burrows. Indigo snakes, eastern diamondback rattlesnakes, gopher frogs, pine snakes and Florida mice may occur. Look for them near the burrow or observe tracks left behind in the soft sand.

Scan ponds for wood ducks in the winter. Barred owls and red-tailed hawks hunt in the hardwood swamp along the river and migratory warblers pause here during migrations. River otters, beavers and an occasional manatee ply the waters of the Santa Fe River. Watch for swallow-tailed and Mississippi kites in the summer.

Blazing star, goldenrod, milkweed, aster and other fall wildflowers attract butterflies. Look for southern fox squirrels foraging on the ground in the sandhills. The longleaf pines produce an abundance of seeds that attract these protected squirrels, the larger and more variously colored cousins of the common gray squirrel.

Check out other species recorded from Fort White WEA, or add observations of your own, by visiting the Fort White WEA Nature trackers project.

If your squirrel watching has been limited to the ubiquitous gray squirrel, you'll be surprised by the large size and color variations of another Florida native, the fox squirrel. Fox squirrels are much less common than gray squirrels, which makes a sighting a special occasion. They also have a heftier body, a longer tail and fur that ranges in color from tawny to gray to dark brown to completely black. A white nose and ears give the fox squirrel's face a mask-like appearance.

Fox squirrels spend more time on the ground than gray squirrels and are slower moving. They forage for acorns, nuts, fruits, insects, mushrooms, buds and tubers, so they require habitats with an open understory. These include open pine flatwoods, sandhills, mixed pine-hardwood areas and rangeland interspersed with trees. Like the gray squirrel, fox squirrels prefer to nest in hollows in trees, but will also construct bulky nests of twigs and leaves in treetops. Young are usually born in late winter/early spring and in the summer.

Fox squirrels are most common in the Panhandle and northern part of the state. Of the three subspecies found in Florida, two are listed as threatened or endangered. One of these, the Big Cypress fox squirrel, occurs only in an area south of the Caloosahatchee River in southwest Florida. The other, the southern fox squirrel, is found from southeastern Florida to Georgia and west to about the Choctawhatchee River. Southern fox squirrels are regularly observed at Fort White. 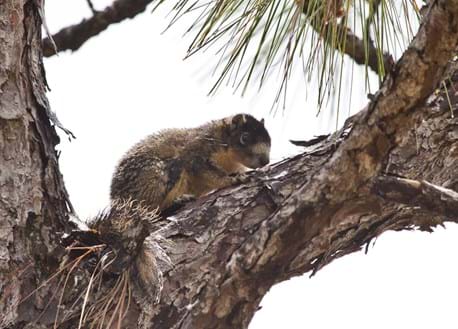