Expect to see gopher tortoises or the sandy mounds that mark their burrows. Keep an eye out for eastern indigo snakes and southern fox squirrels. Red-bellied, downy, pileated and red-headed woodpeckers are often spotted on standing snags where they search for insects and excavate nesting cavities. This quiet site affords an excellent opportunity to listen for Bachman’s sparrows, eastern towhees, orchard orioles, pine warblers and white-eyed vireos. Look for tracks of mammals and reptiles in the sandy trails and enjoy displays of wildflowers in the spring and fall. Watch overhead for Southeastern American kestrels and red-shouldered and red-tailed hawks.

The Bachman’s sparrow is one of the signature species of mature, open pine forests, once the predominant habitat across a broad swath of Florida and the southern U.S. Over the last century, the extent of these forests has drastically declined due to logging, conversion to other uses and fire exclusion. As a result, there have been large population declines of the Bachman’s sparrow and other species that occupy this same habitat, including the federally endangered red-cockaded woodpecker.

Bachman’s sparrows occur in Florida year-round. Their preferred habitat is mature pine forests with an open, grassy understory of wiregrass, palmetto and broomsedge, a composition typically maintained by regular burning. These forests provide sparrows with grass seeds and insects to feed on and the conditions necessary for successful nesting.

With its gray-brown coloration and habit of disappearing into dense groundcover, this shy and secretive sparrow is difficult to see. The best viewing opportunities occur in the spring and summer when the males sing to attract mates and establish breeding territories. The beautiful and distinctive song, often delivered from an exposed perch, is usually a long whistled note followed by a trill. It may be heard from February or March through the summer, mainly in early morning or late afternoon.

The range of the Bachman’s sparrow extends from Palm Beach County in Florida, north to southern Virginia and west to Oklahoma and Texas. This species is highly dependent on frequent prescribed fire that provides ample seeds and insects for food and the low, open groundcover needed for successful nesting. This management regime also benefits red-cockaded woodpeckers, gopher tortoises and other fire-dependent species. 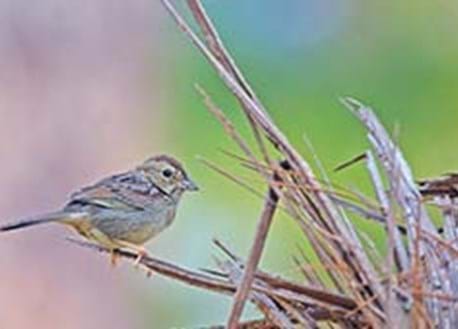