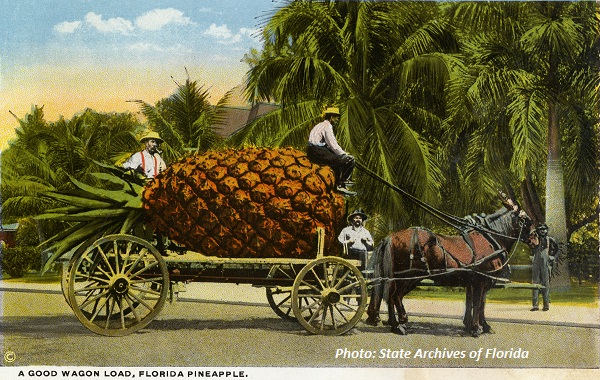 The powerful Calusa Indians once thrived in villages and towns along coastlines of the sea, rivers and lakes -- areas that much later became Charlotte County. The Seminoles immortalized these mostly-maritime natives by naming the major river in the area Caloosahatchee or “river of the Calusa.” Development of Charlotte County began in earnest in 1881 with a four-million-acre purchase of “swamp and overflowed lands” in south Florida. By 1883, Col. Isaac Trabue of Kentucky, bought enough land for a town he called Trabue, now known as Punta Gorda. It briefly became the pineapple capital of the U.S. because of his influence in cultivating the fruit to raise prize money for an annual town chess tournament. More typical industries of cattle ranching, timbering and phosphate mining soon took over. In 1914, Edward Babcock bought two townships to the east for a hunting preserve and his “Crescent B” cattle ranch. During the 1930s, Babcock leased the timber rights, allowing railroad grades to be built through the flatwoods. Timber was shipped as far away as Africa, to be used in the diamond mines. Remnants of a water tower used to fill steam engines in 1930 still remain along the Seaboard Grade.

In 1941, the Florida Game and Fresh Water Fish Commission purchased 19,200 acres from Fred Babcock. The WMA was originally named for Cecil M. Webb, who served as commissioner from 1948-1953. The area was renamed Fred C. Babcock/Cecil M. Webb Wildlife Management Area in 1995.

In 1957, field trial grounds were set up in conjunction with organizations that donated materials and supplies for a clubhouse, stables, kennels and picnic area. Since 1969, the grounds have been open for limited quail hunting. In 1968, the Commission leased 1,280 acres of the field trial grounds to the Boy Scouts for a camp and facilities. In the 1990s, the Charlotte Harbor Flatwoods and the Yucca Pens Unit were added to the management area. The name Yucca is a derivative of “euchre” (pronounced “you-ker”). Herds of cattle were lost or gained during euchre, a gambling card game played at the cow pens where cattle were sold before shipment to Cuba. A northern reporter wrote a story about the trick-taking game but misspelled it as “yucca” and this variant stuck.

With over 80,700 acres, this WMA is among the last undeveloped expanses of hydric (wet) pine flatwoods in southwest Florida, although it is surrounded by residential development, citrus groves and improved pasture.