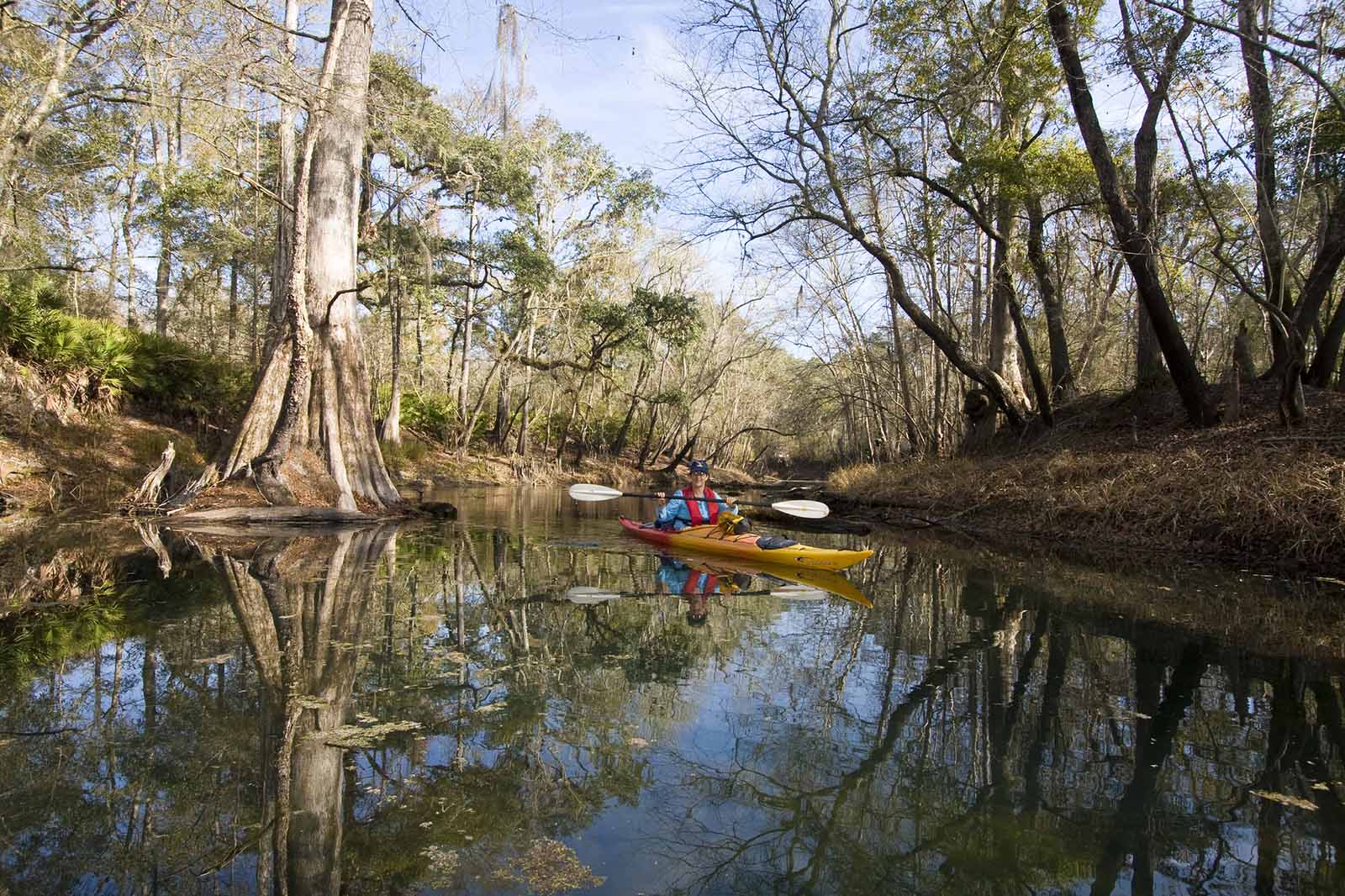 The best way to see wildlife on the area is by canoe or kayak early in the morning or evening, or by walking quietly along the Aucilla Sinks Trail or the roads accessed from Highway 98. A wide variety of resident and migratory birds occurs here. Along the Wacissa, look for the prothonotary and yellow-throated warbler, black-crowned night-heron, yellow-crowned night-heron, nesting osprey, limpkin and purple gallinule. The threatened wood stork is found in marshy areas and often feeds in ditches. Pine warblers are common in the pinelands, and the Swainson’s warbler, although uncommon, is sometimes seen in shrubby moist undergrowth. The hooded warbler breeds in Aucilla’s upland forests.

Red-shouldered hawks are regularly spotted and nest along the Florida Trail at Aucilla Sinks. White-eyed vireos occur year-round. Listen for the distinctive calls of breeding Acadian flycatchers in moist, swampy forests and great crested flycatchers in a variety of habitats.

In addition to birds, visitors may spot reptiles such as snakes, turtles, alligators and anoles basking in the sun. They join a variety of invertebrates, from the tiny, yet bothersome, ticks and mosquitoes, to large spiders known as orb weavers. These harmless spiders often construct sticky webs across trails in late summer and early fall, surprising early morning hikers or bicyclists.

Check out other species recorded from Aucilla WMA, or add observations of your own, by visiting the Aucilla WMA Nature Trackers project.

Add your bird observations to the Aucilla WMA eBird Hotspot.

Commonly seen poking around in the shallow water along the Wacissa for its favorite food the apple snail, the limpkin is a good indicator of water quality. The limpkin finds food by both touch and sight, an easier task in clear water. Apple snails thrive on sawgrass and prefer specific water levels. Excessive water levels that result in blooms of non-native invasive plants are harmful to apple snails and in turn to limpkins.

The limpkin's name is derived from its characteristic "limping" walk. Sometimes called the "crying bird," the limpkin has a loud wailing call often heard at night and on cloudy days and thought to resemble the sound of a human in distress.

The endangered snail kite found in southern Florida also feeds on apple snails, swooping down and snatching the snail and then carefully extracting the snail from its shell with its specialized bill. The limpkin cracks open the shell and then eats its inhabitant. By looking at discarded shells, researchers can easily distinguish snails eaten by limpkins and those eaten by snail kites.