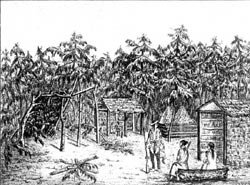 The Apalachicola region is one of the earliest populated sites in Florida. Numerous aboriginal sites are found along former and present banks in the lower Apalachicola River valley. Scattered throughout the estuary and river swamps are clam and oyster shell middens, remnants of the early inhabitants. Creek Indians from Georgia and Alabama began settling along the river in the early 1700s. Apalachicola is an Indian word for “the people on the other side.” Today, the river today separates Eastern and Central time zones.

Bloody Bluff, which may have been the site of one or more skirmishes fought during 1816 between American Forces and Creek Indians and their black allies who occupied the “Negro Fort” (now called Ft. Gadsden) at nearby Prospect Bluff 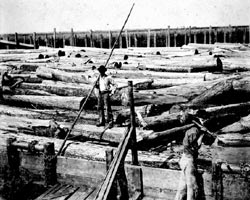 During the 1830s and 1840s increasing numbers of steamboats shipped cotton from inland plantations to Apalachicola for export. The blockade of Apalachicola Bay by Union forces during the Civil War effectively stopped steamboat travel. After the war, lumber became the main cargo. Sawmills sprang up along the river, and millions of board feet of longleaf pine and cypress passed through the port of Apalachicola. Pines were also sought for their sap, which was distilled into turpentine and rosin, known collectively as naval stores.

Turpentine camps once dotted the Apalachicola River boundaries. The town of Creels consisted of a church, a commissary, housing for workers, storage or processing points, and barns for horses and livestock.

During the Civil War, defending the Apalachicola River was strategically essential and several artillery batteries were constructed along the high bluffs.

The famous Apalachicola oyster industry began in the later part of the 19th century, and by 1896, three oyster-canning factories were shipping 50,000 cans of oysters each day.

In 1946, Congress passed the River and Harbor Act, which authorized the Corps of Engineers to maintain a 100-foot by 9-foot channel in the Apalachicola-Chattahoochee-Flint system from Apalachicola to Columbus, Georgia. The dredging of the channel and disposal of dredged material along the banks degraded habitat. Fisheries biologists with the Florida Fish and Wildlife Conservation Commission have documented a 75 percent reduction in the sport fish population in areas covered with the dredged sand.

In 1974 the governor and cabinet authorized the first purchase of a large tract of land in the Lower Apalachicola River Basin. Since then, 108,287 acres of land have been established into the Apalachicola River WEA, with FWC having lead management authority for approximately 77,224 acres. 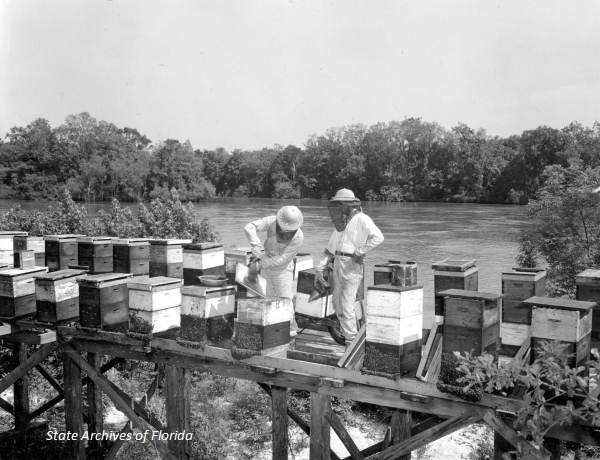 If you paddle down the quiet creeks and bayous lined with blooming tupelo, titi, and black gum in mid-April or May, you will hear a loud steady hum of honey bees. The Apalachicola River valley is the only place on earth where tupelo honey is produced commercially. Popularized in the film Ulee's Gold, real tupelo honey is produced solely from the flowers of the white tupelo and is light golden amber with a greenish cast. Unlike other honeys, real tupelo honey won't granulate.

The Lanier family of Wewahitchka has been harvesting Tupelo Honey from hives in the Apalachicola River swamp for over 100 years. Film director Victor Nunez bought a jar of tupelo honey from the Laniers' stand in downtown Wewahitchka in 1996. He explained he wanted to make a movie about a bee keeper and asked Ben and Glynnis Lanier to help. Ben taught actor Peter Fonda how to handle bees, and other members of the Lanier family were cast as extras. All the bee yards shown in the film belong to the Laniers.