The mature hardwood forest of Andrews is home to a variety of birds and mammals. Many native species such as raccoons, opossums, gray squirrels, bats, screech-owls, woodpeckers and wood ducks use tree cavities for nesting sites, dens, roosting areas and escape cover. Clearings created by the previous landowner favor edge-preferring species such as white-tailed deer, white-eyed vireos and gopher tortoises. The FWC maintains these clearings as well as scattered roadside openings in a mixture of permanent grasses and seasonal grains. In the spring, ground nesting birds such as wild turkey use the clearings for nesting and brood rearing. You can view and photograph wildlife from two observation towers on the roadside openings.

The Suwannee River basin is a major route for numerous species of migrating birds. Many canopy-dwelling birds such as warblers, vireos, orioles and cuckoos inhabit the forest at different times of the year.

In late summer and early fall, you can hear hickory nuts and acorns falling throughout the forest. Upland game such as white-tailed deer, wild turkey, feral hogs and gray squirrels benefit from the mast-producing hardwoods found here.

Check out other species recorded from Andrews WMA, or add photo observations of your own, by visiting the Andrews WMA Nature Trackers project.

See what others have observed at the Andrews WMA eBird Hotspot.

Learn how to contribute your own sightings at eBird.org

This rare bat is distinguished from other more common bats found on Andrews by its long ears, which are more than an inch in length and fall to the center of its back when laid down. It also has two large, glandular lumps on its nose. Rafinesque’s big-eared bats inhabit forested communities, especially those associated with floodplains. They begin feeding well after dark and prefer moths and other soft-bodied insects. More common north of Florida, Rafinesque’s big-eared bat is known from fewer than a dozen locations in Florida. 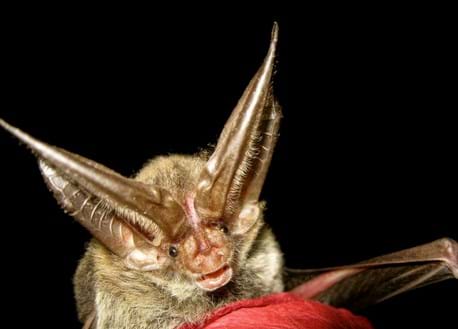