The FWC Commission listened to a review and discussion on the next steps for goliath grouper research and management at the December 2018 meeting. 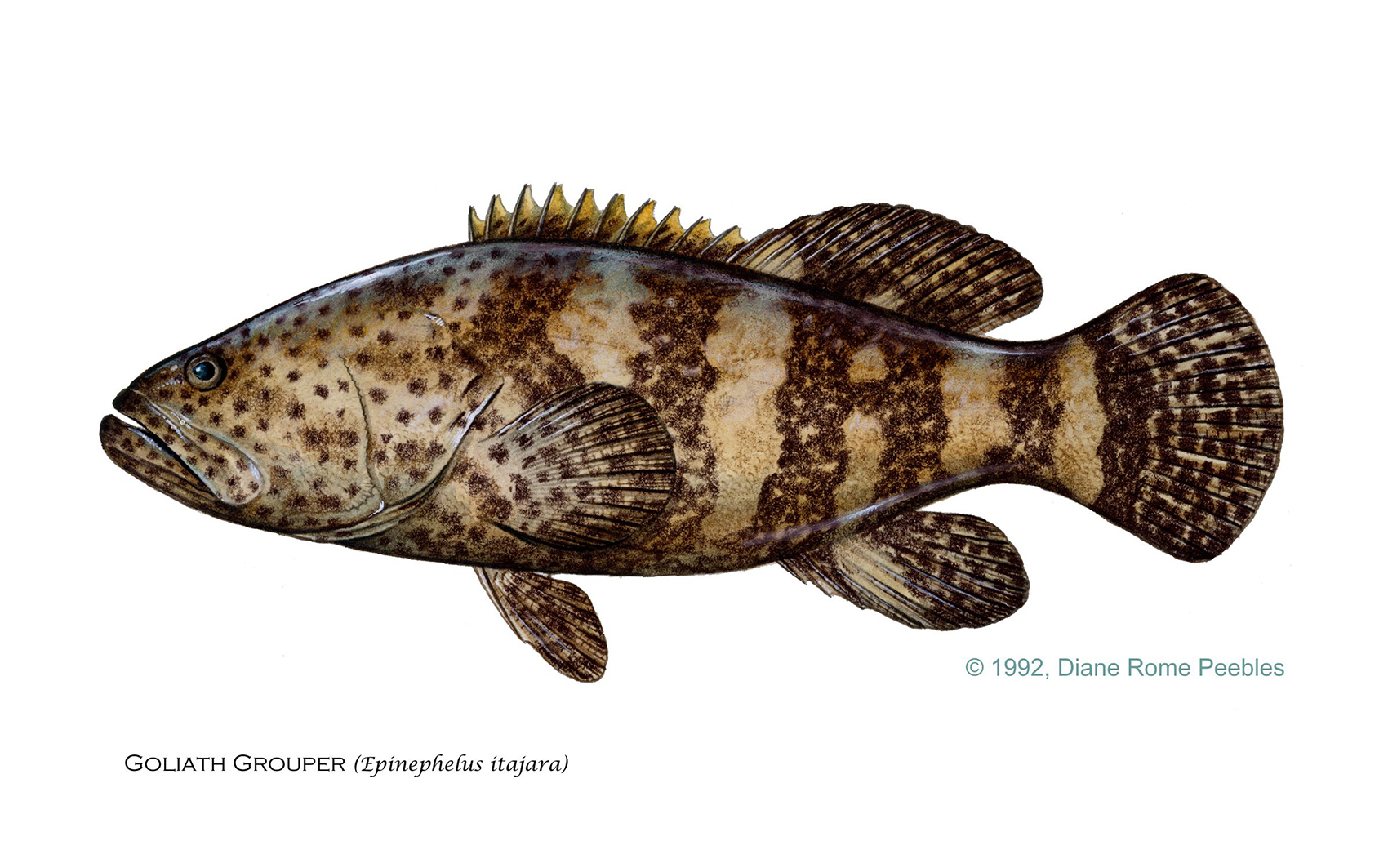 The giant of the grouper family, the goliath (formerly called jewfish) has brown or yellow mottling with small black spots on the head and fins, a large mouth with jawbones that extend well past its small eyes, and a rounded tail. It also has five dark body bands or stripes that are most visible on young goliath.

What to do when you’ve caught a goliath grouper?

Harvest and possession has been prohibited in both state and federal waters off Florida since 1990.

Goliath grouper populations declined throughout their range during the 1970s and 1980s due to increased fishing pressure from commercial and recreational fishers and divers.

This led to a prohibition from harvest in U.S. waters in 1990.

Goliath grouper populations have substantially recovered since the harvest prohibition took effect. There have been increases in abundance in certain areas (e.g., Tampa Bay, Charlotte Harbor and the Ten Thousand Islands), and the distribution of goliath grouper populations has extended into areas of its former range throughout Florida, including the Big Bend and Panhandle regions.

However, it is not clear as to when they may fully recover and when harvest restrictions could be relaxed.

Stock assessment were conducted for goliath grouper in 2004 and 2010, but both were rejected by a review panel for use in federal management.

At their July 2014 meeting in Key Largo, this committee reviewed the most up-to-date scientific information on goliath grouper and recommended a new stock assessment for this species.

As a result, the most recent stock assessment, conducted by the FWC was completed in June 2016 (SEDAR 47). The stock assessment indicates abundance in south Florida has greatly increased since the fishery closed in 1990. However, in the final step of the review process, the assessment was rejected by an independent panel of scientists for use in federal management due to a lack of reliable indicators of abundance outside of south Florida.

Goliath grouper is the largest of the Atlantic groupers. This giant can reach 800 pounds (455 kg) and over 8 feet (2 meters) in length. The Florida record is a 680-pound goliath grouper caught off Fernandina Beach in 1961. The species had been targeted both commercially and recreationally since at least the late 1800s.

There are a number of factors that contributed to the decline of goliath grouper, included declines in juvenile habitats, strong site fidelity and being long lived. Goliath form large aggregations and these often occur in areas where fishermen congregate. Goliath are also susceptible to large scale mortality events such as cold temperatures and red tide blooms.

Goliath grouper are opportunistic predators and feed mostly on slow-moving, bottom-associated species. Calico crabs make up the majority of their diet, with other invertebrate species and fish filling in the rest. Goliath grouper will occasionally feed on fish that are struggling on a fishing line, but they have not been shown to actively hunt down fast, free swimming fish such as snappers and groupers. Prey is ambushed, caught by a rapid expansion and opening of the mouth that allows prey to be sucked in and swallowed whole.

Goliath grouper were historically found in tropical and subtropical waters of the Atlantic Ocean, both coasts of Florida and from the Gulf of Mexico down to the coasts of Brazil and the Caribbean.

In waters off Florida, young goliath grouper spend up to 5-6 years in mangrove habitat, particularly in the Ten Thousand Islands area off southwest Florida, which seems to be its center of abundance and may serve as critical nursery habitat. Because mangroves serve as important juvenile habitat for these fish, their loss could affect population recovery even if reproductive levels of adult fish are high. As they grow, goliath grouper move to shallow reefs, eventually joining adult populations offshore on shallow artificial and natural reefs. Adults seem to prefer habitat with overhangs, bridges, piers and shipwrecks.

Goliath grouper are relatively long-lived, with a maximum known age to be at least 37 years old. However, some scientists estimate that these fish may have the ability to live over 50 or even 100 years. Reproductive maturity first occurs in fish 5 or 6 years of age (about 36 inches in length) due to their slow growth rate. Males mature at a smaller size (about 42 inches) and slightly younger age than females. Females first mature at 6-7 years of age and 47-53 inches in length. In the eastern Gulf, goliath grouper have been known to form spawning groups of 100 individuals or more. These groups occur at consistent sites such as wrecks, rock ledges and isolated patch reefs during July, August and September. Studies have shown fish may move up to 62 miles (100 km) from inshore reefs to these spawning sites. In southwest Florida, presumed courtship behavior has been observed during the full moons in August and September.