Species Endemic to the Florida Keys 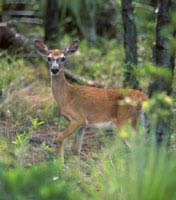 The Key deer (Odocoileus virginianus clavium, FE) is a subspecies of white-tailed deer.  These small deer are found from Big Pine Key to Sugarloaf Key in the Lower Florida Keys and utilize all habitat types on these islands.  Key deer have high saltwater tolerance, low birth rates, and solitary habits.  They breed in fall and winter and exhibit behavior typical of other white-tailed deer.  Fawns are generally born between April and June.

The Lower Keys marsh rabbit (Sylvilagus palustris hefneri, FE) is the smallest subspecies of marsh rabbits found from Big Pine Key to Boca Chica Key.  They inhabit higher elevation levels surrounding fresh and salt water marshes.  Breeding is most productive between December and June but can occur year-round.  They nest in thickets or logs on the ground made of grass and fur.

The Key Largo woodrat (Neotoma floridana smalli, FE) is a rodent found in the tropical hammocks of North Key Largo.  Woodrats create large stick nests at the base of trees or rocks, or they may use solution holes in the root systems of large trees.  They can breed year-round but are most productive in winter months.

The Stock Island tree snail (Orthalicus reses, FT) is native to Stock Island and Key West but went extinct in these areas in 1992.  Small populations remain in introduced areas outside its historic range, most notably in No Name Key and Key Largo.  They inhabit tropical hardwood hammocks and prefer poisonwood, pigeon plum, Jamaican dogwood, strangler fig, and gumbo limbo trees.

The Key silverside (Menidia conchorum, ST) is endemic to the Lower and Middle Florida Keys.  They inhabit protected saline lagoons and are tolerable of a wide range of salinities.

The Key ringneck snake (Diadophis punctatus acricus, ST) has been found in Key West, Big Pine, Little Torch, Middle Torch, and No Name keys, but may be found where pine rocklands occur elsewhere.