The Key Largo woodrat is a midsized rodent that can reach a length of 12-16 inches (31-41 centimeters).  This species of woodrat has a brown and black back with a reddish-brown tint on its sides, and a short tail that is brown on top and white on the bottom (Florida Natural Areas Inventory 2001). 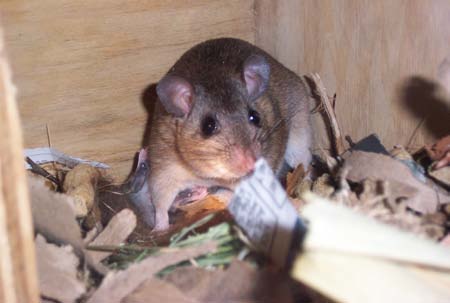 The woodrat excavates an area in the organic soil at the base of trees, rocks, or stumps to build stick nests.  In the absence of stick nests, it is believed that Key Largo woodrats use the root systems of large trees or solution holes (U.S. Fish & Wildlife Service 1999).  Breeding peaks in the winter, but the Key Largo woodrat can reproduce all year (Hersh 1981).  During periods of breeding, females search for and defend nesting sites, while males are less aggressive.  During periods of cooler weather, males become more aggressive in the search for nesting sites (U.S. Fish & Wildlife Service 1999).  Females give birth to one to four young per litter with two to three litters born each year (Hersh 1981, University of Georgia 2008).  Sexual maturity is reached by both sexes at the age of five months (Hersh 1981).

The Key Largo woodrat can only be found in tropical hammocks in Key Largo, Florida. 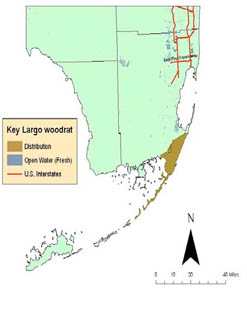 Habitat loss and fragmentation are the main threats to the Key Largo woodrat.  Development in tropical hammocks in Key Largo has caused the thinning and destruction of vegetation in the hammocks.  Habitat fragmentation threatens the species by limiting gene flow and increasing risk from other threats.  The limited range makes the Key Largo woodrat vulnerable to storms and fires.  Sea level rise also threatens the species as their habitat would be inundated with ocean water.  Other threats include increased predation by feral cats and competition from black rats (U.S. Fish & Wildlife Service 1999).