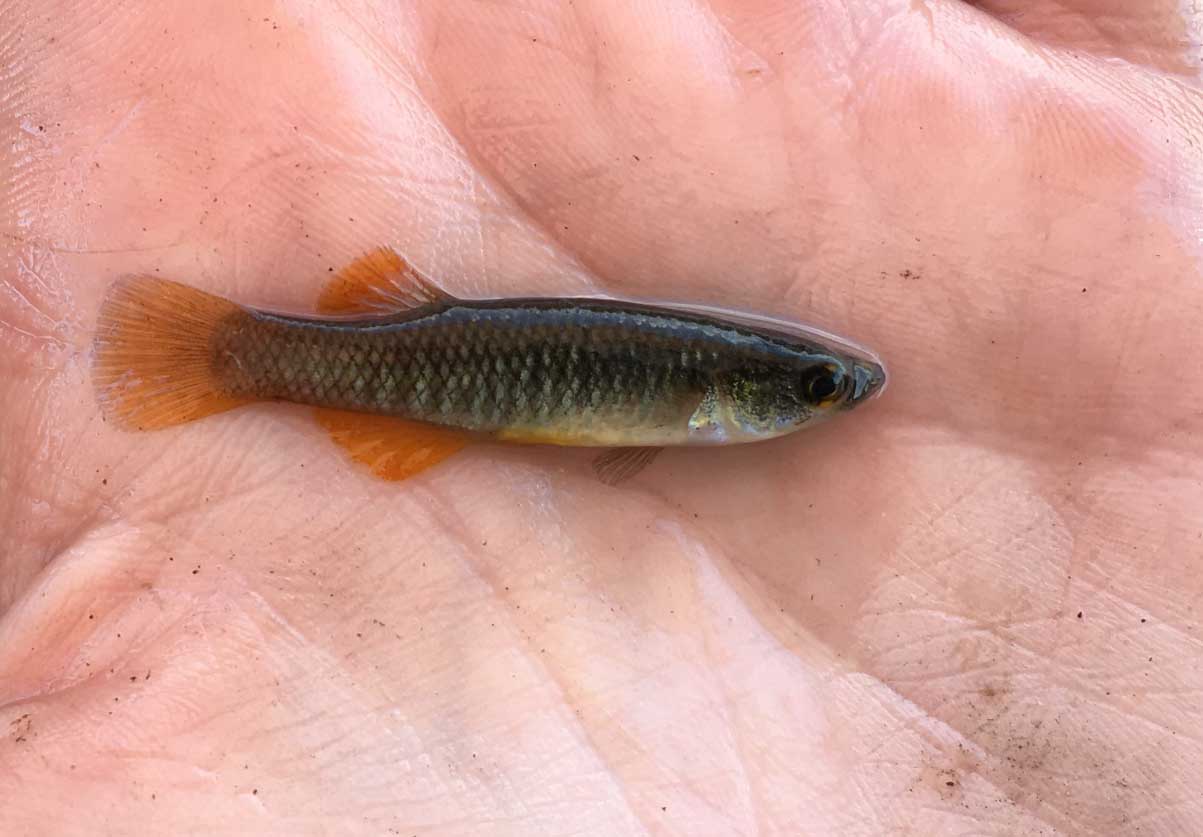 The saltmarsh topminnow (Fundulus jenkinsi, ST) inhabits cordgrass and needlerush marshes.  In Florida, they are found in Perdido Bay and Pensacola/Escambia Bay.  Their limited geographic range and small population in Florida make them vulnerable to impacts from individual dredging projects and surface water pollution sources.

The blackmouth shiner (Notropis elanostomus, ST) is a small minnow found in shallow, stationary waters of the Blackwater and Shoal river systems.  Threats to this species include water quality degradation, water withdrawals, dredging, and impoundments.

The bluenose shiner (Pteronotropis welaka, ST) occurs in streams in northwest and northeast Florida, with no known occurrences between the St. Johns and Apalachicola rivers.  They inhabit clear to turbid waters with deep pools or holes and areas with varying densities of vegetation.  Threats to this species include changes in water quality and quantity, dredging, pollution, and impoundments.

The crystal darter (Crystallaria asprella, ST) is found in deep, flowing waters of large creeks and rivers.  In Florida, they are only known to occur in the Escambia River.  Threats to this species include human disturbance, and exploitation by the aquarium trade.

The Okaloosa darter (Etheostoma okalossae, FT) is found in Okaloosa and Walton counties.  They live in small streams fed by ground water seepage from adjacent sandhills.  The primary threat to this species is the introduction of the brown darter with which it competes for food and space.

The southern tessellated darter (Etheostoma olmstedi maculaticeps, ST) inhabits small to medium streams with a variety of substrates such as sand, mud, silt, and gravel bottoms.  In Florida, they have only been found in the Ocklawaha River Basin.  Their primary threats are surface water pollution, reduced flows, predation, and competition.

The Atlantic sturgeon (Acipenser oxyrinchus, FE) inhabits freshwater as a juvenile and saltwater as an adult.  The Florida distribution is along the Atlantic coast of north and central Florida and the St. Marys and St. Johns rivers.  Their primary threats are poor water quality and fishery by-catch.

The Gulf sturgeon (Acipenser oxyrinchus desotoi, FT) is found in the northern Gulf of Mexico and rivers of Florida.  They spend most of the year in freshwater where they breed and migrate to saltwater in the fall.  They were once overfished, but now their primary threat is any obstacle that prevents sturgeon from reaching their spawning areas.

The shortnose sturgeon (Acipenser brevirostrum, FE) is found in the St. Marys and St. Johns rivers.  The main threats to the survival of this species are obstacles that block access to historical spawning grounds.

The smalltooth sawfish (Pristis pectinata, FE) is found off the coast of southwest Florida and along the Atlantic Coast north of Indian River Lagoon.  Females give birth in estuaries during April and May.  Adults are typically found in open water habitats.  Primary threats include fishing by-catch and entanglements.