The Atlantic sturgeon is one of seven species of sturgeons found in North America.  Sturgeons are prehistoric species that date back to the time of dinosaurs.  Sturgeons have physical features that separate them from other kinds of fish such as: a spiral valve stomach and cartilaginous skeleton (like sharks and rays), but they have scutes (hard, protective, large individual body plates) instead of shark’s denticles or bony-fish’s scales.  The Atlantic sturgeon has barbels located on the underside of the snout, no teeth, rubbery lips, and a suctorial mouth for vacuuming food off the water bottom.  The Atlantic sturgeon's coloring typically is dark brown along the upper (dorsal) side, shading to a creamy white-colored belly (ASSRT 2007).  The Atlantic sturgeon is a large fish that can reach a length of 14 feet (4.3 meters), a weight of over 800 pounds (363 kilograms), and possess strength to leap nine feet (2.7 meters) into the air.

Sturgeons are benthic feeders, which means they feed on organisms located in or on the bottom of waterways.  Their diet primarily consists of crabs, grass shrimp, lancets, brachiopods, and marine worms.  Atlantic sturgeons typically gorge themselves during the fall-to-spring period when they are in brackish and salt water, and appear to fast during the spring-to-fall period when they are in fresh water.  They are popular in the food industry as a source of caviar.

The Atlantic sturgeon is considered a homestream-spawner, which means it will usually return to the fresh water river that they were born in to spawn.  Spawning occurs during the spring in freshwater rivers, when temperature, flow, and pH are at optimum levels.  Atlantic sturgeon are also considered skip-spawners, which roughly means that if conditions are not optimum for a successful spawn, set, and hatch, they will skip that spawning season and absorb their eggs.  After a missed spawning attempt, Atlantic sturgeon often wait three years before spawning again.  When spawning does occur, the eggs are ejected, fertilized, and rapidly adhere to objects that are located in or near the bottom of the river (ASSRT 2007).  The egg mass for a mature Atlantic sturgeon female (sow) ranges between 250,000 to 1,000,000 eggs.  Eggs hatch roughly four days post-spawn when water temperatures range from 61°F-64°F (16-17°C).  Most of the larvae will not survive due to reasons such as deformity, disease, fungus, predation, lack of food, ill-timed floods or droughts, and random chaos (Jeffrey Wilcox pers. comm. 2011). 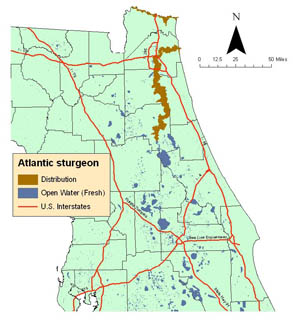 The Atlantic sturgeon inhabits both salt and fresh water habitats, cycling between the two.  Some migrate into brackish and saltwater during the fall and feed there throughout the winter months, and migrate into fresh water rivers during the spring and hold there through the summer months, while others remain at sea for years.  This species of sturgeon can be found from Labrador, Canada, south to the St. Johns River in Florida (ASSRT 2007).

Now that rampant overharvest has been halted, the main threat to the Atlantic sturgeon’s survival is the dams located on Atlantic Seaboard rivers, which prevent sturgeons from reaching historic spawning areas, therefore decreasing the spawning rate of the species.  Habitat destruction is also a threat to the sturgeon’s population.  Atlantic sturgeon habitats have increased vulnerability since they inhabit areas that are at risk of dredging.   The dredging of river channels is a practice that can destroy or suffocate the sturgeon eggs located on objects in the benthic layer of the river.  Dredging of rivers also affects the food source of sturgeons as they are benthic feeders.  Other threats of the sturgeon population include lethal by-catch and declining water quality.  Water quality can be affected by pollution reaching the floodplains of the river, and excessive water withdrawals from the rivers.  Sturgeons are slow breeders, which makes any loss of breeders or spawning habitat a serious problem for the species (ASSRT 2007).

Printable version of this page