The Gulf sturgeon, also known as the Gulf of Mexico sturgeon, is one of seven species of sturgeon found in North America.  Sturgeons are prehistoric species that date back to the time of dinosaurs.  Sturgeons are popular in the food industry as a source of caviar.  They have physical features that separate them from other kinds of fish, such as a spiral valve stomach and cartilaginous skeleton (like sharks and rays); however, they have scutes (hard, protective, large individual body plates) instead of shark’s denticles or bony-fish’s scales.  Gulf sturgeon have barbels located on the underside of the snout, no teeth, rubbery lips, and a suctorial mouth for vacuuming food off the bottom.  The sturgeon's coloring typically is dark brown along the upper (dorsal) side shading to a creamy white-colored belly (Wakeford 2001).  Gulf sturgeon are large fish that can exceed a length of eight feet (2.4 meters), a weight of over 300 pounds (137 kilograms), and possess strength to leap nine feet (2.7 meters) into the air.

What is there to appreciate about a big fish? Plenty, say scientists who study the Gulf sturgeon. The Gulf sturgeon grows to greater than six feet in length, sports bony plates on its head and body, has fleshy "whiskers" on its long snout, and no internal skeleton. This ancient fish evolved from much larger ancestors that lived more than 225 million years ago. Gulf sturgeon may live for more than 40 years, not reaching sexual maturity until seven or eight years of age or later. 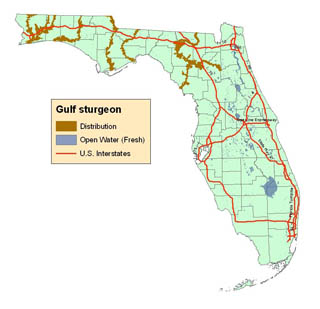 Sturgeon are anadromous, a term used to describe fish that spend a part of their lives in saltwater, yet travel upstream in freshwater rivers to spawn. Such fish return year after year to the same stream where they were hatched. For Gulf sturgeon, which are found from Florida to Louisiana, this means a move from salt to fresh water between February and April and a move downriver between September and November. They spend the winter in the Gulf of Mexico in sandy-bottom habitats six to 100 feet deep, where their diet consists of marine worms, grass shrimp, crabs and a variety of other bottom-dwelling organisms. They eat very little while in freshwater rivers.

Gulf sturgeon can be found from the Mississippi River in Louisiana, east to the Suwannee River in Florida where they inhabit both salt and fresh water habitats, annually cycling between the two.  Gulf sturgeon migrate into brackish and salt water during the fall and feed there throughout the winter months.  In the spring, they migrate into fresh water rivers and remain there through the summer months (Wakeford 2001).

Little is known about the early life stages of the Gulf sturgeon throughout its range.   After the late 1800s, Gulf sturgeon populations declined dramatically, a result of the high demand for their delicious meat and valuable roe, and dam construction, dredging activity and other man-made habitat alterations. The decline prompted state and federal officials to place the sturgeon on the protected species lists in the 1980s and 1990s and to enact a harvesting and possession ban. Today, the free-flowing, spring-fed Suwannee River supports the largest and most robust population of Gulf sturgeon in the state and the wider Gulf of Mexico region. Adults spawn on scoured limestone substrates in the upper reaches of this 200-mile long river. As they swim along, sturgeon occasionally leap out of the water. Every spring and summer, lucky boaters and campers along the Suwannee River witness this spectacle. Power boaters can reduce the risk of injury to themselves and the fish by boating slower during the appropriate time of year. This also increases the chance of seeing the sturgeon and other wildlife along the way.

Gulf sturgeons are considered homestream-spawners, which means they usually will return to the freshwater river that they were born in to spawn.  Sturgeons spawn during the spring in freshwater rivers, when temperature, flow, and pH are optimum.  If conditions are not optimum for a successful spawn, sturgeons will skip that spawning season and absorb their eggs, often waiting three years before spawning again.  When sturgeons do spawn, the eggs are ejected, fertilized, and rapidly stick to objects that are located in or near the bottom of the river (Wakeford 2001).  The egg mass for a mature female Gulf sturgeon ranges between 250,000 to 1,000,000 eggs.  Eggs hatch roughly four days post-spawn when water temperatures range from 61°F-64°F (16.1-17.8°C).  Most larvae do not survive due to reasons such as deformity, disease, fungus, predation, lack of food, and ill-timed floods or droughts (Jeffrey Wilcox, pers. comm. 2011).

Now that rampant overharvest has been stopped, the main threat to Gulf sturgeon survival is the dams located on Gulf seaboard rivers, which prevent sturgeon from reaching historic spawning areas, therefore decreasing the spawning rate of the species.  Habitat destruction is also a threat to the sturgeon population.  Gulf sturgeon habitat has increased vulnerability because they inhabit areas that are at risk of dredging.  The dredging of river channels is a practice that can destroy or suffocate sturgeon eggs located on objects in the river.  Dredging of rivers also affects the food source of sturgeons as they are bottom feeders.  Other threats to the sturgeon population include lethal by-catch and declining water quality.  Water quality can be affected by pollution reaching the floodplains of the river, and excessive water withdrawals from the rivers.   Sturgeons are slow breeders, which makes any loss of breeders or spawning habitat a serious problem for the species (Wakeford 2001).