Dependence on gopher tortoise burrows varies among commensal species, but for some the burrows are essential. Burrows provide a relatively constant microhabitat that offers protection from fire and inclement weather. Species that are believed to depend significantly on resources provided by the gopher tortoise burrow or its community of inhabitants are known as priority commensals. Below you will find common vertebrate and invertebrate commensal species associated with the gopher tortoise as outlined in the Gopher Tortoise Management Plan.

Along with the gopher tortoise, FWC has authorized the limited relocation of a suite of species known as priority commensals which may be encountered during the process of relocating gopher tortoises. This includes the state-Threatened Florida pine snake, the federally-Threatened eastern indigo snake, the Florida mouse, gopher frog, and eastern diamondback rattlesnake. The Florida mouse and gopher frog are protected from take and possession under F.A.C. 68A-29.002 and 68A-26.002, respectively, and are managed under FWC's Imperiled Species Management Plan. Thus, take and possession of both species still requires a permit even though they are no longer state-Threatened species. The Commission also provides guidance for the relocation of other non-listed commensals (vertebrate and invertebrate), and exotic species encountered during relocations in the Gopher Tortoise permitting Guidelines. Additional information on priority gopher tortoise commensals is provided below. 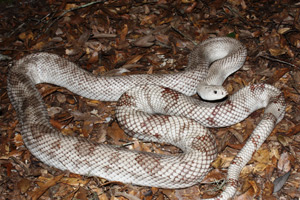 The Florida Pine Snake (Pituophis melanoleucus mugitus) is a large, nonvenomous snake with dark brown to reddish blotches on a gray to sandy-colored background. They range in length from 48 to 66 inches, with a maximum recorded length of 90 inches. Florida pine snakes occupy large areas of fire-maintained, open canopy, dry habitats that include sandhill, old fields, pastures, sand pine scrub, and scrubby flatwoods. Geographically, pine snakes are found in the Atlantic and Gulf coastal plains, from South Carolina to South Florida, west to Mobile Bay, Alabama. In Florida, pine snakes can be found in appropriate habitat statewide outside of the Everglades and Keys. Florida pine snakes use gopher tortoise burrows, pocket gopher burrows and stump holes to forage, nest, and escape adverse weather conditions or fire. Florida pine snakes are a cryptic species and it is estimated that they spend up to 70-80% of their time underground. 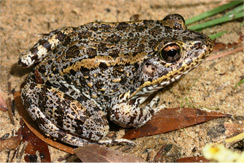 The gopher frog (Lithobates capito) is a stout-bodied frog measuring 2.5 to 4.4 inches with a large head and mouth, stocky body, stubby legs, and prominent eyes. They have warty or wrinkled skin which ranges in color from light tan to gray with black or brown irregular blotches on the back, sides, and legs. Gopher frogs occupy fire-maintained habitats, particularly sandhill, but can also be found in upland pine forests, scrub, mesic flatwoods, and mixed hardwood communities. They may also occupy pastures and other open disturbed areas where gopher tortoises are found. Gopher frogs breed in shallow ephemeral ponds with emergent grassy vegetation and open canopies that are maintained by periodic prescribed fires. Male gopher frogs have a breeding call that can be compared to a deep snoring sound. Their geographic range occurs in the southeastern Coastal Plain from the Mobile River delta in Alabama east to North Carolina, with disjunct populations in Central Alabama and the Cumberland Plateau in Tennessee. Historically, the gopher frog has occurred throughout Florida except for the Everglades region. Their presence is closely linked to gopher tortoises due to their reliance on gopher tortoise burrows for shelter and food. Gopher tortoise burrows are especially important to the survival of newly metamorphosed gopher frogs, as they depend on these and other underground refuges for survival.

Gopher frogs were delisted in Florida in 2017; however, this species remains part of the Imperiled Species Management Plan to provide guidance for monitoring and conservation to ensure their continued survival. Gopher frogs are listed under Florida Administrative Code Chapter 68A-26, rules Relating to Amphibians, and have prohibitions on take, transport, sale, and possession. Gopher frogs encountered during tortoise relocation activities may be released to suitable on-site habitat in accordance with the Gopher Tortoise Permitting Guidelines and Gopher Frog Species Conservation Measures and Permitting Guidelines. 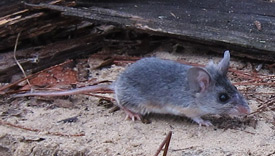 The Florida mouse (Podomys floridanus) is distinguished from other rodents in Florida by its relatively large ears, eyes, and hind feet. Adults typically have distinct orange-buff colored patches on cheeks, shoulders, and lower sides. They occupy fire-maintained, dry upland communities such as scrub, scrubby flatwoods, and sandhill ecosystems. The Florida mouse is endemic to Florida and only occurs in the northern two-thirds of peninsular Florida. Because the Florida mouse primarily uses gopher tortoise burrows as sites for excavation of its own burrows, this species is highly impacted by the decline of gopher tortoises. Gopher tortoise burrows provide shelter and protection during dispersal and from fire and adverse weather. Florida mice construct their burrows as small, U-shaped tunnels off the sides of the main gopher tortoise burrow. The burrows made by the mice also serve as nesting sites, with expanding nesting chambers usually present.

The Florida mouse was delisted by the FWC in Florida in 2017, although loss of habitat, particularly scrub communities, continues to be a threat to Florida mouse populations. Florida mice are still protected from take under Rule 68A-29 F.A.C. To provide guidance on continued monitoring and conservation efforts, the Florida mouse remains part of the Imperiled Species Management Plan.

Florida mice are unique to the ridge system or natural community they inhabit. Any translocation should make every effort to maintain these unique populations. Mice captured from a specific area, should remain within that area. Individuals considering engaging in the limited relocation of Florida mice can find additional information on the ridges and other significant areas inhabited by Florida mice within their range can be found in the PDF below. 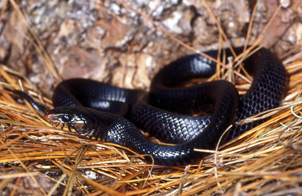 The eastern indigo snake (Drymarchon couperi) is the second longest snake native to the United States. They can reach 103 inches in length, although most adults are between 54 and 90 inches. The body and head uniformly black with an iridescent blue sheen and a reddish-to-cream colored chin and throat. Eastern indigo snakes rely on large tracts of unfragmented habitat, including scrub and pine flatwood upland areas, and marshy bottomlands. Prescribed fire is an important disturbance mechanism that maintains suitable upland habitat. In the northern part of its range, eastern indigo snakes use separate summer and winter core areas and rely on gopher tortoise burrows for overwintering refugia. In South Florida, they are more active year-round and can be found in a variety of appropriate habitats. Historically, they have occurred in the southeastern Coastal Plain from southeastern Georgia, throughout Florida, through southern Alabama and southeastern Mississippi. Eastern indigo snake declines have been linked to habitat loss and fragmentation, and the loss of gopher tortoise colonies.

The eastern indigo snake is protected as a Threatened species by the Federal Endangered Species Act and as a Federally-designated Threatened species by Florida Administrative Code Chapter 68A-27, Rules Relating to Endangered or Threatened Species. If eastern indigo snakes are detected during tortoise relocation activities, work must be halted until the snake escapes unharmed. For more information, please refer to the United States Fish and Wildlife Service (USFWS) Standard Protection Measures for the Eastern Indigo Snake. 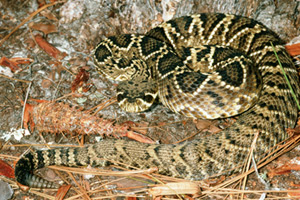 The eastern diamondback rattlesnake (Crotalus adamanteus) is the largest venomous snake in North America, reaching a maximum length of 96 inches. Most, however, range from 39 to 59 inches and can be identified by the characteristic diamond-shaped splotches running down their back. The eastern diamondback rattlesnake is found in longleaf pine habitats, old fields, floodplains, hardwood hammocks, dry prairies, and coastal strands. These snakes can be found statewide in appropriate habitats, including the barrier islands and keys. Eastern diamondback rattlesnakes require large tracts of open-canopy habitats with diverse, herbaceous ground cover. Prescribed fire is an essential mechanism that maintains the structure of these habitats. This species ranges from North Carolina south along the coastal plain to Florida and westward to eastern portions of Louisiana. In addition to stump holes and other underground shelter sites, these snakes use gopher tortoise burrows as seasonal refuges.

Only professionals with venomous snake experience should attempt to relocate eastern diamondback rattlesnakes. If a rattlesnake is unable to be relocated they should be allowed to escape the area unharmed when possible.