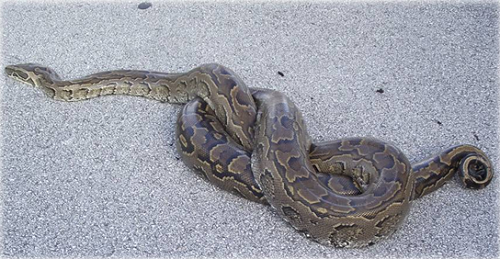 Northern African pythons, also known as African rock pythons, are not native to Florida and are considered an invasive species due to their potential impacts to native wildlife. Unlike the Burmese python, they are not widely established in Florida. However, a small localized population of this species has been documented in western Miami-Dade County.

This species is not protected in Florida except by anti-cruelty law. Pythons can be killed on private property with landowner permission and can also be killed year-round and without a permit on 25 public lands in south Florida. The FWC encourages people to humanely kill wild caught pythons whenever possible.

Northern African pythons are listed as a conditional species in Florida and can no longer be acquired as pets in the state. A permit is required to possess Northern African pythons for commercial sale, public educational exhibition or research. They are also federally listed by the U.S. Fish and Wildlife Service as an Injurious Species under the Lacey Act, which prevents the importation of pythons into the United States.

The Northern African python is a large, non-venomous species of constrictor snake. The average size found in Florida is around 10 feet in length, but they can grow up to 20 feet long in their native range. While very similar in appearance to the Burmese python, the pattern on the back of the Northern African python is less defined. In addition, their belly scales display a pattern of black and white markings, while those of the Burmese python are white.

In their native range, Northern African pythons can be found in a variety of habitats, ranging from semi-arid areas to swamps. They are particularly well suited for existence in agricultural areas and canals. 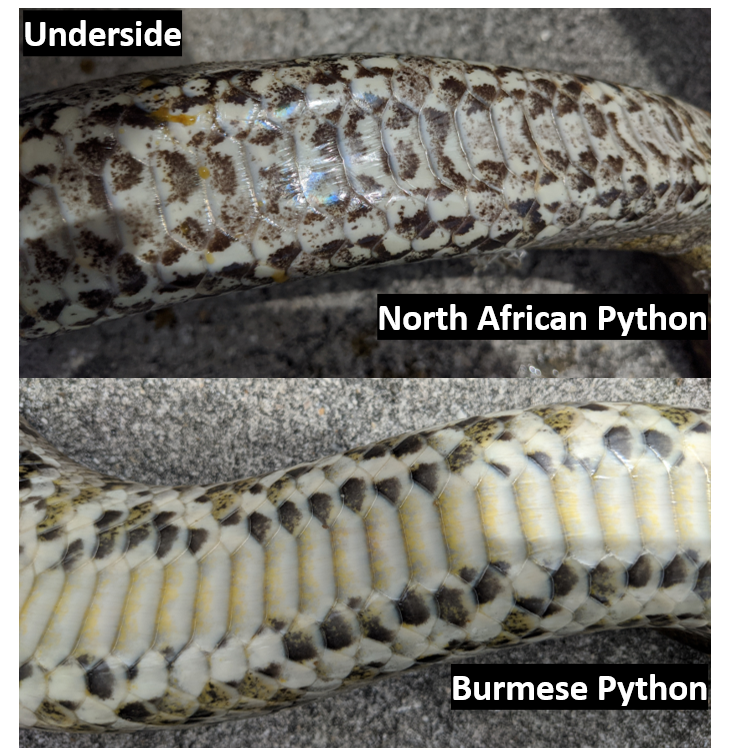 The best method to correctly identify a North African python from a Burmese python is to compare the ventral scales located on the underbelly of the snake.  The North African Python belly scales display a pattern of black and white markings, while those of the Burmese python are white.

In Florida, Northern African pythons may prey upon mammals, birds, reptiles and fish. 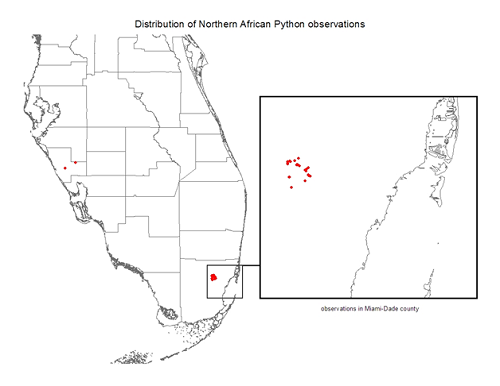 This python species was first reported in Florida in 2001. In 2009, several Northern African pythons were found, indicating a potential breeding population in western Miami-Dade County. The FWC and partners actively survey for and remove these invasive snakes.

Wild pythons generally do not attack humans unprovoked and attacks on domestic pets from pythons in Florida are rare. However, as sizable predators, they are capable of preying upon larger animals, such as cats and dogs. Adult supervision of small children and pets is recommended when outside in the areas where these snakes are known to occur. 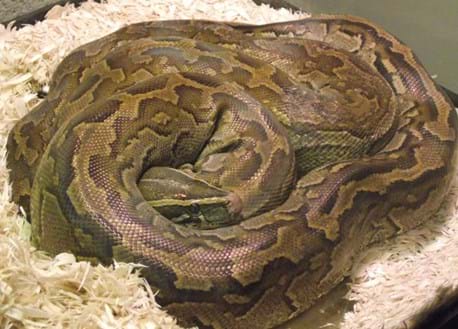 What should I do if I see a Northern African python?

How is the FWC managing this species?

Python control and management is a high priority for the FWC. Although sightings of Northern African pythons are rare, the FWC works collaboratively with its partners to assess the threat of this species and further develop management strategies. The FWC and partners are taking a multifaceted approach, focusing on removal and community engagement with the goal of eradicating this species. This approach includes: