Researching the First Years of a Turtle's Life 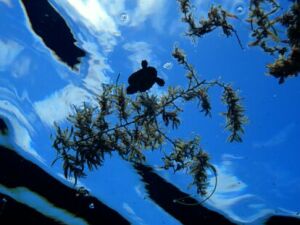 One of the least understood stages in the life of a sea turtle is the pelagic phase, in which sea turtle hatchlings swim into the open part of the ocean and spend the first years of their life growing and developing. Called the "lost years," this period actually lasts close to a decade in some species.

In a paper published in 2001, FWRI research scientist Blair Witherington wrote about his work observing and capturing neonate loggerheads in their habitat. During 18 trips off the coast of Cape Canaveral, Florida, Witherington followed the western edge of the Gulf Stream. The following is taken directly from his report:

After the initial physical oceanographic measurements were made, timed searches for turtles were conducted by observers on the bow of the research vessel (elevation was approximately 3 m above the surface) as it moved at idle speed (approximately 2.5 knots) through the center of each downwelling line. When a turtle was observed, the observer noted the time of the observation, and the geographic position, species, and behavior of the turtle. Observed turtles fell into four categories: 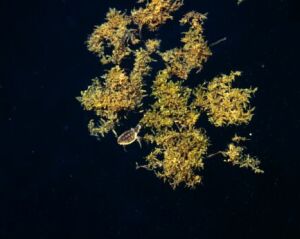 Sargassum fragments and seagrasses were the most common among the ingested plants, with small, slow-moving animals also in their diets. Post-hatchling loggerheads were found to be low-energy, float-and-wait foragers, living both within and outside downwelling lines. In his paper, Witherington also discusses the amount of tar and plastics found in the turtle's stomachs when the lavages were performed. (See "Tar and Trash Invading Sea Turtle Habitats")