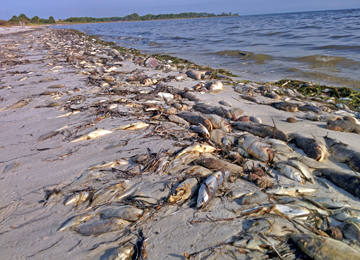 These are some of the more common
descriptions of fish kill causes in Florida.

Low Dissolved Oxygen:
Also called (LDO) or (DO), refers to the volume of oxygen that is contained in water. Oxygen enters the water by photosynthesis of aquatic biota and by the transfer of oxygen across the air-water interface. When the oxygen level in the water drops too low, the fish suffocate.

Algae Bloom:
Algae blooms that are very dense can actually cause low dissolved oxygen. During the daylight hours the algae produce oxygen by photosynthesis which helps replenish the oxygen levels in the water. During the night, the algae actually USE oxygen to survive. This, coupled with the normal biological demand of oxygen from fish, invertebrates, and other aquatic life causes reduced oxygen with the lowest levels found just prior to dawn. Dense algae blooms can also suffocate the fish by releasing toxins into the water or simply by the shape and amount of algae particles in the water, which act to "clog" the gills.

Diseased or Lesioned Fish:
Fish kills caused by diseases usually occur when fish are already stressed by poor water quality or overcrowding. In most situations little can be done once a disease strikes except wait for it to run its course and see what is left.

Pollution Event:
Although fish kills caused by pesticides, herbicides, or other chemicals are not as common as those caused by oxygen depletion, some do occur. This also includes sewage spills as well as illegal dumping of same.

Red Tide:
Fish die rapidly from the neurotoxic effects of the red tide which enter their bloodstream through the gills. Because the fish die so quickly, these toxins do not have time to build up in their tissue.

Unknown Cause:
When aquatic anomilies are reported the caller does not always have enough information for us to determine "Probable Cause", or scientists have not yet reached the reported site to conduct investigation and determine cause. When cause is determined this record will be updated.