The below examples are some of the reasons that manatees require rescue; if you see a possibly distressed manatee please call the Wildlife Alert Hotline (888-404-3922, then press "7"). A trained biologist will be able to assess the manatee's condition and determine the best course of action. 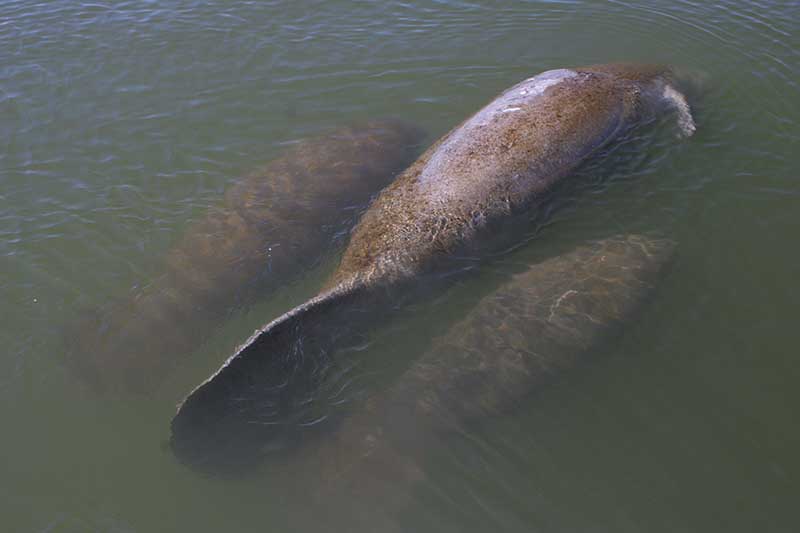 Impact trauma occurs when a boat hull, skeg, lower end unit, or even the propeller makes contact with a manatee often breaking ribs, causing internal bleeding, bruising, and damaging their lungs. These injuries can cause the manatee to be excessively buoyant (may lean towards one side and float near the surface) or negatively buoyant (tendency to sink). 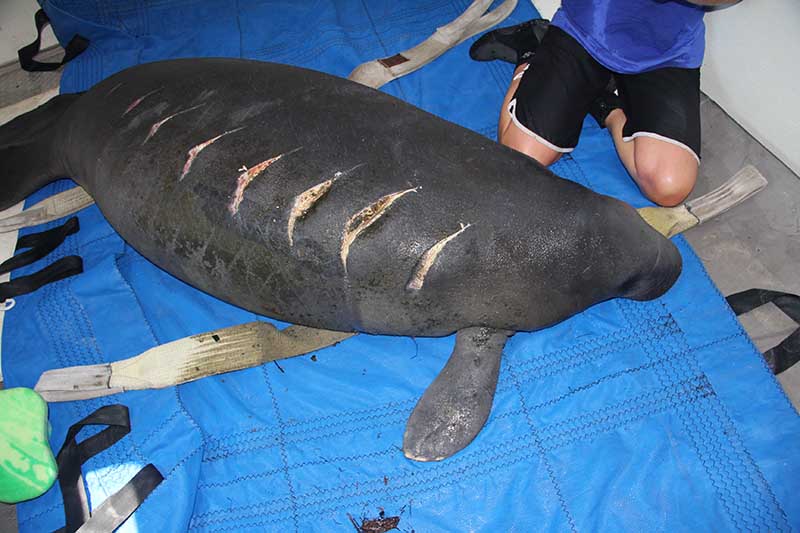 Sharp trauma is caused by the propeller or another part of the boat cutting into a manatee. This trauma can cut deep into tissues, organs, and bones.

Manatees can become entangled in crab trap float lines, monofilament, and other debris. Entanglement in fishing gear and other debris can impact their ability to swim and feed and can cause chronic unhealed wounds. 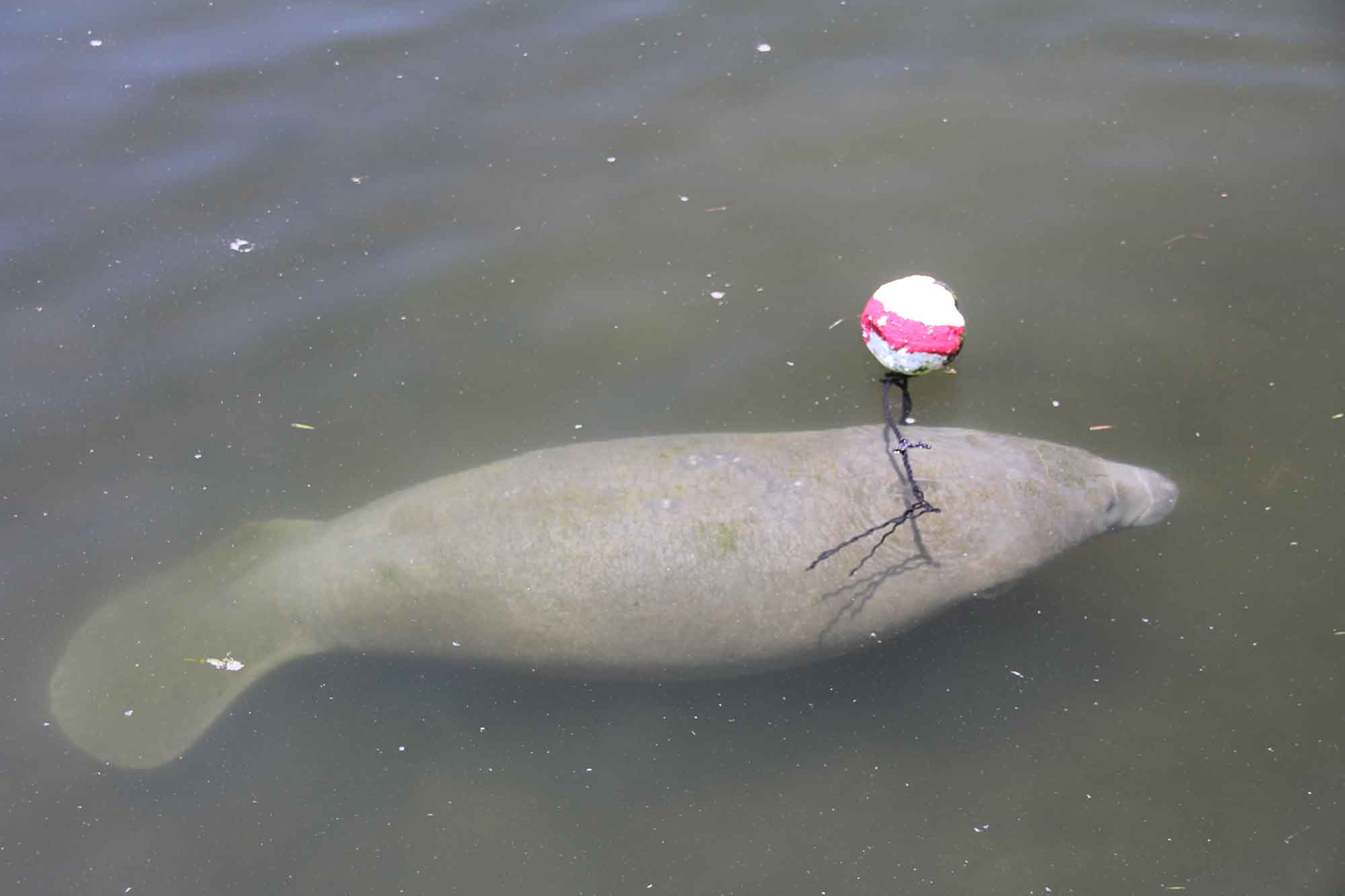 Most crab trap entanglements involve the float line wrapping around one or both of the manatee's flippers. Sometimes the line can become wrapped around, the body, neck, or tail. If the line becomes embedded in the skin it must be removed surgically. Severe cases can lead to flipper amputation. 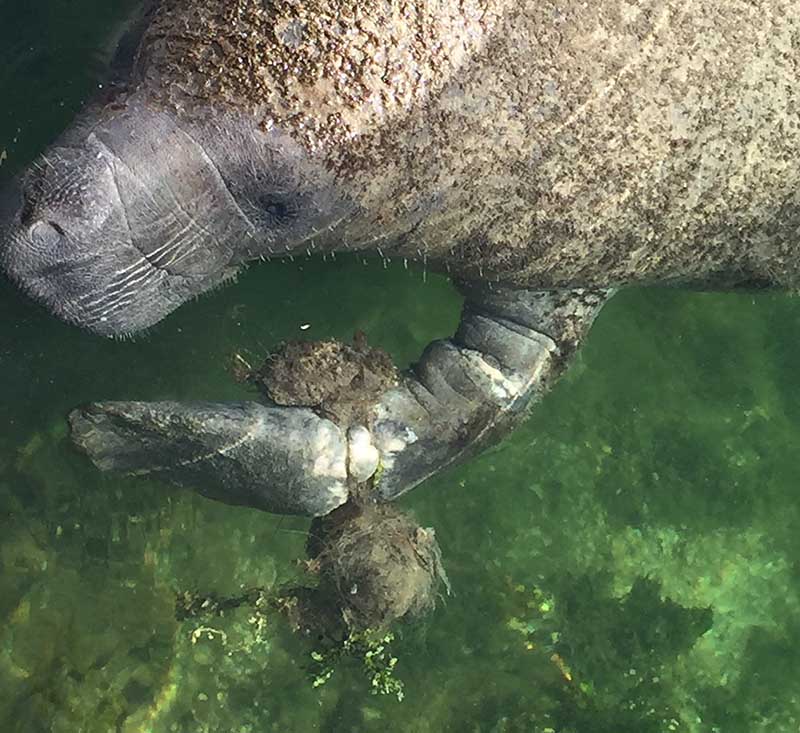 Monofilament, also known as fishing line, can become deeply embedded in manatee skin and in some cases the skin will heal over the line. Embedded line must be removed surgically and sometimes the flipper must be amputated. 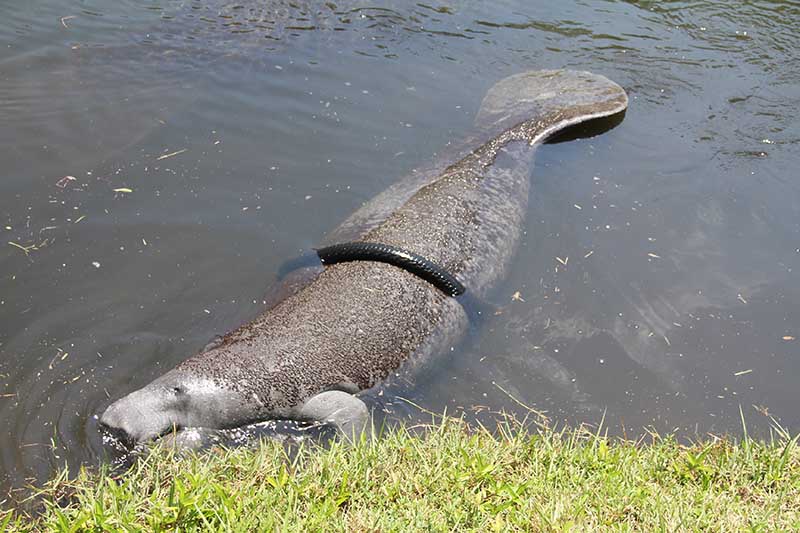 Ingested fishing lures or hooks, and debris that wraps around the entire body can be life threatening. If an entire body wrap is not removed the manatee can continue to grow into the entanglement which will eventually deform it's body.  For example, a manatee was documented with a bike tire located around its middle much like a belt.

There are several different natural reasons for a manatee to need rescue. The most common are cold stress, red tide, and becoming tidally stranded. 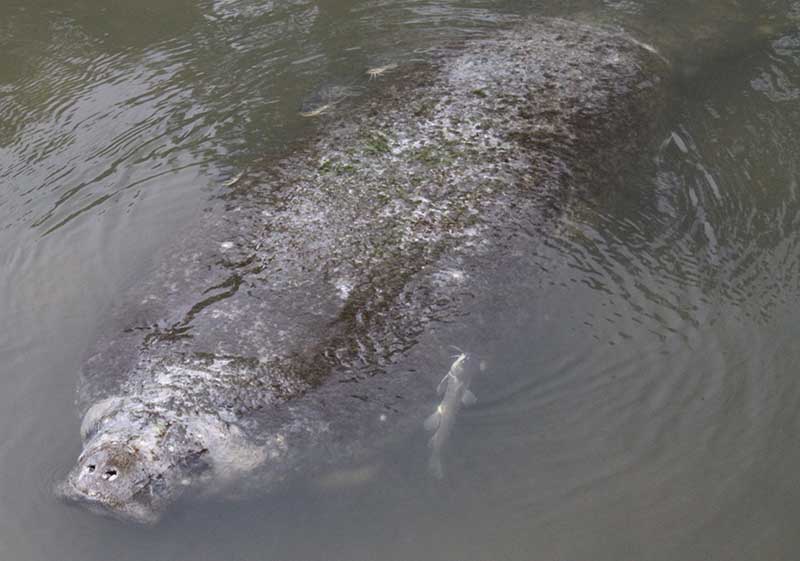 Cold stress is usually observed in smaller manatees during the winter season when the water temperature is less than 68⁰ Fahrenheit. Manatees with cold stress typically have bleaching on their skin, visible abscesses, unresolved sores, a heavy barnacle or algae load, and are underweight. Manatees with these symptoms found away from any warm water sources are of the most concern. 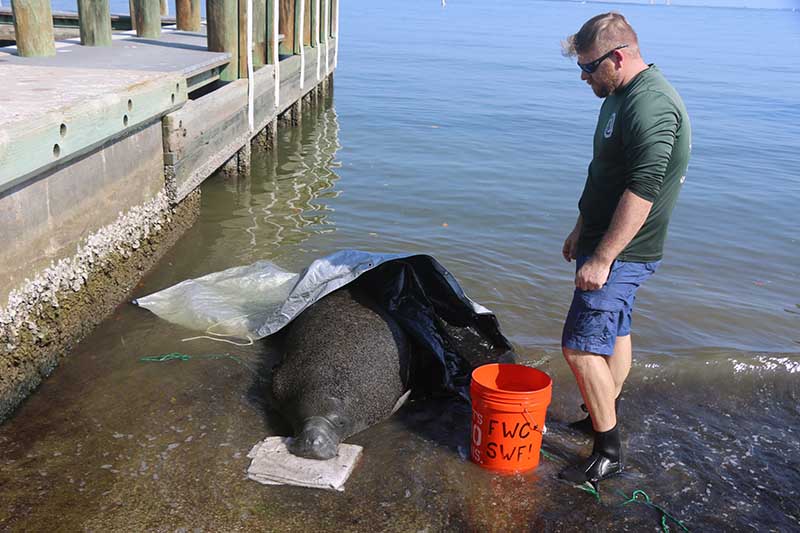 In Florida, a red tide is a higher than normal concentration (bloom) of a microscopic algae called Karenia brevis. This algae produces a biotoxin known as brevetoxin. A manatee suffering from the effects of red tide may experience a lack of coordination and experience involuntary muscle twitches and seizures. These effects can impact its ability to swim and lift its head to breathe. Learn more about red tide and other harmful algal blooms. 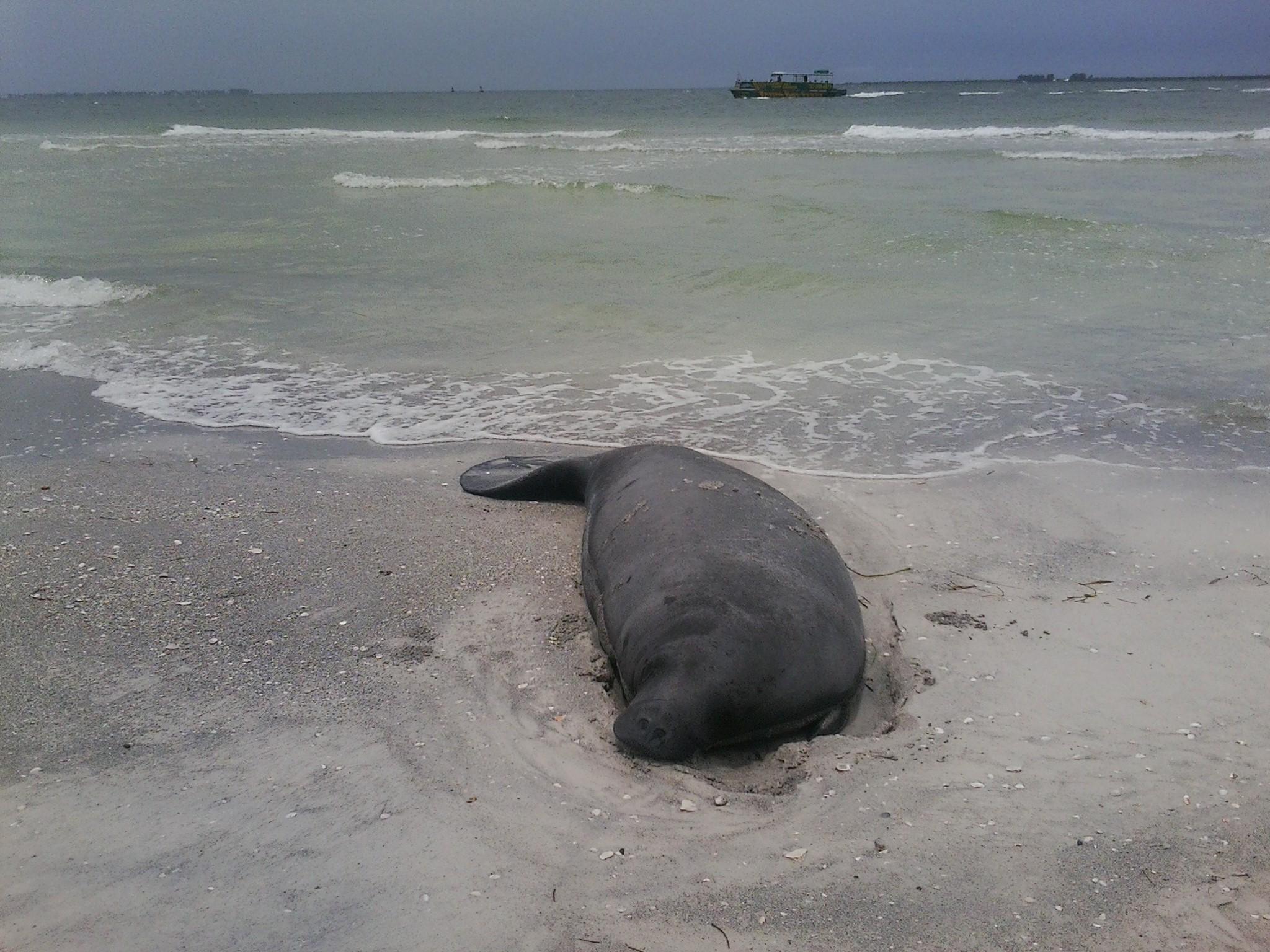 Tidally stranded manatees are typically healthy manatees that have become stranded or beached due to a receding tide. In most cases, biologists will monitor the manatee until the incoming tide raises water levels and it can swim away; in some cases, the manatee will be moved to deeper water. 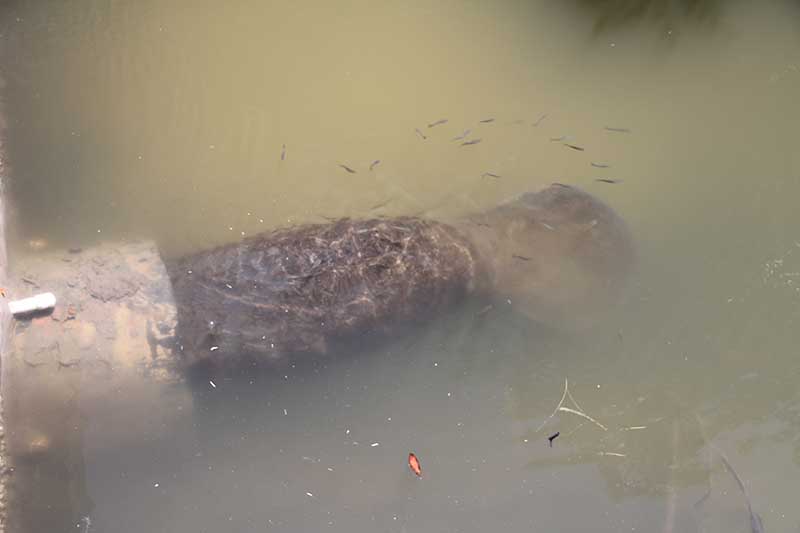 Manatees can swim through culverts, drainage pipes, locks, dams, or other water control structures and become trapped or lost. Unusually high water (due to hurricanes, heavy rains, or tidal changes) may allow manatees access to previously inaccessible area. Once the water recedes the manatees become trapped behind natural or man-made obstacles. 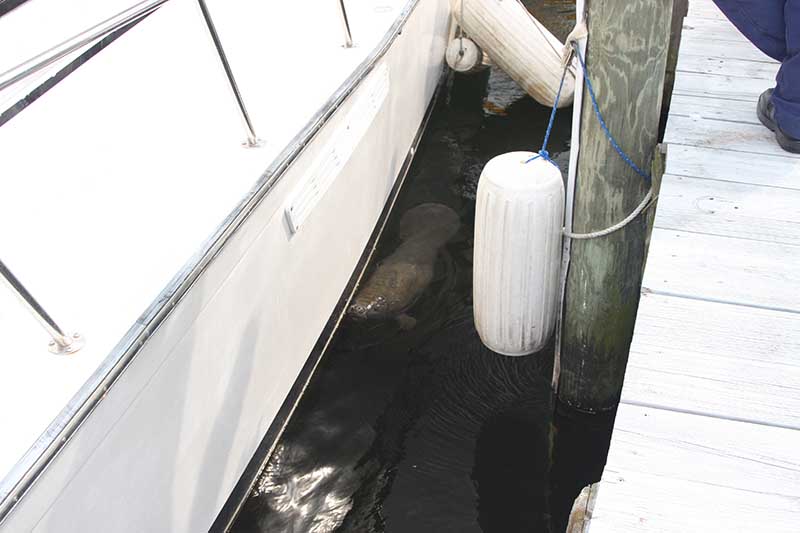 A calf by itself is any manatee that is less than 6 feet long and not associated with an obvious mother. Typically, they are emaciated and lethargic. Sometimes these calves can be found trying to suckle on large objects in the water. 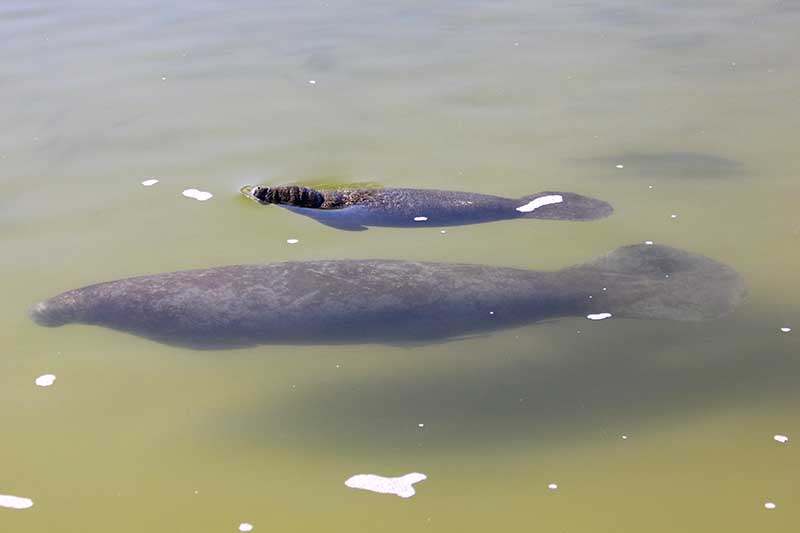 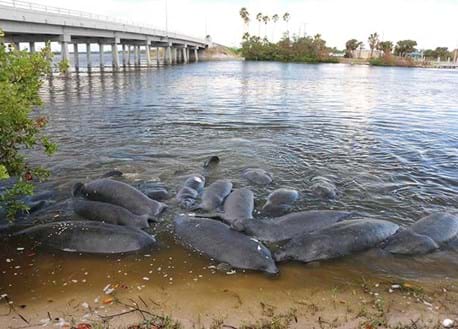 Manatees mate in herds consisting of a focal female and multiple males, from a few to over a dozen, attempting to mate with her.  Mating herds are most often observed during the warmer months, but can occur year-round. They can last anywhere from a few hours up to a week long. The manatees are often observed splashing or climbing on top of each other in the water. Sometimes the female will ground herself in shallow water to limit the males access. Although it is rare, it is possible for one or more manatees to become tidally stranded during mating behavior.

Please keep your distance from mating herds. Any interaction may interfere with the manatee's natural process of mating. It can also be dangerous for people to approach these large unpredictable manatees.

Learn about manatee mating herds and what you should do if you see one.

Tracking tags are a useful tool in manatee rescue and research activities. VHF radio-tags can be deployed to assist rescue teams with locating mobile, injured manatees. Satellite-linked radio-tags are used by researchers to monitor rehabilitated manatees that are considered to be at high risk for poor adaptation to the wild after release, and to study individual movements and habitat use. Learn more about our telemetry and tracking program.

Because the floating tags can look similar to crab trap buoys, tagged manatees are often mistakenly thought to be entangled. One way to tell the difference is to look for a rigid antenna protruding from the top of the tag. Always report suspected entangled manatees and tagged manatees to FWC’s Wildlife Alert Hotline. Learn more about how to report a tagged manatee.

We ask that the public keep a large distance from tagged manatees so as not to alter their behavior. Please do not touch or grab the tags-they are harmless to the manatee. 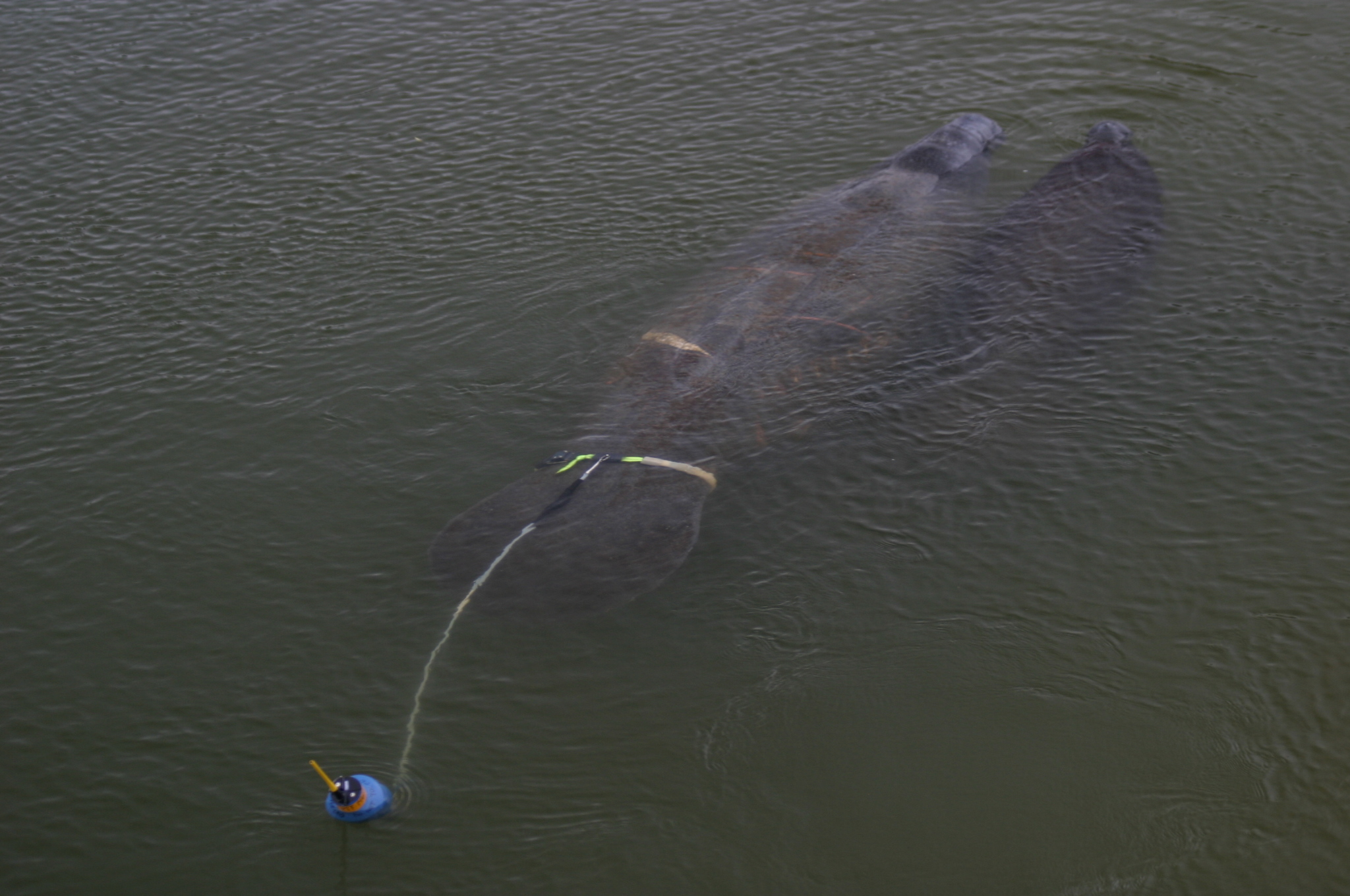 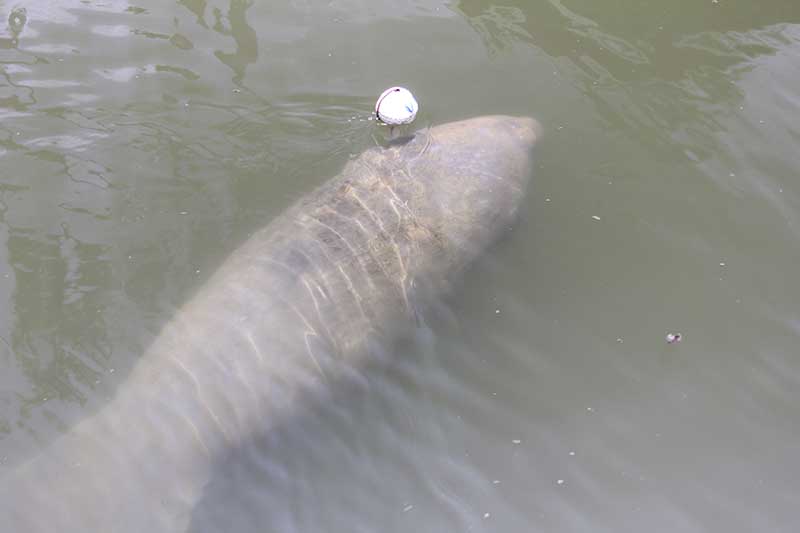