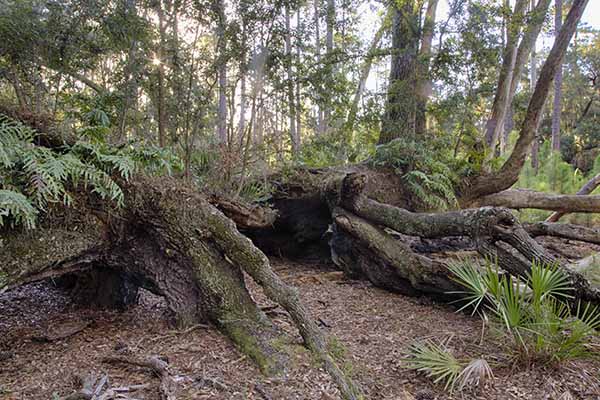 Split Oak Forest WEA was acquired in 1994 with funds received through the Florida Fish and Wildlife Conservation Commission's Mitigation Park Program. The now-defunct Mitigation Park Program was established in 1998 as an off-site alternative to on-site protection for rare species impacted by development. When developers eliminated habitat for an endangered or threatened species, they paid fees that were used to buy and manage high quality habitat elsewhere.

The area derives its name from a unique squat-trunk live oak located on the north side of the property, which split into two halves prior to FWC’s acquisition.  Portions of the property were once used for turpentine and cattle operations. Previous owners cleared approximately 54 acres to create improved pasture along the western boundary, just south of the Clapp Simms Duda Road entrance. Area staff have found evidence of clearing activities associated with a small orange grove (2-4 acres, now fallow), and possible homestead activities in the xeric oak communities just east of the improved pasture.

In the late 1980s, prior to State acquisition, the owners converted 12 acres of scrubby flatwoods on the east side of the property into pasture. The effort has left the area with scattered scrub oak varieties with extensive bare ground between oak clusters. Later, 3 basin marshes were excavated to create artificial impoundments for future planned development of the site. The result of the excavations produced 3 large ponds with adjacent large spoil areas.

The management goal on the area is to restore and maintain the habitats critical to the long-term benefit of state and federally listed upland species, particularly the gopher tortoise. Management tools include prescribed fire, mechanical treatments and chemical treatment of invasive plant species.