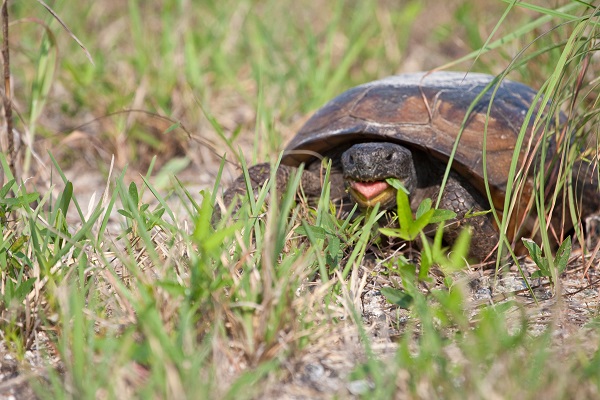 The best wildlife viewing is along the hiking trails, affording year-round observations of protected species including the gopher tortoise and Florida scrub-jay. These two rare species occur primarily south of the creek and in the northwest portion of the WEA. The oak hammocks host palm warblers and other songbirds during seasonal migrations. Wood storks and herons may occur during the dry season when water is concentrated in the wetlands. Red-tailed hawks prefer open areas over former pastures and field edges, while red-shouldered hawks favor wooded rivers and timbered swamps. Look for northern harriers flying low over marshes and fields. From the trail along the creek or from a canoe, watch for alligators, peninsula cooters, wood ducks and river otters.  Manatees occasionally venture into the deeper water of Hickey Creek from the Caloosahatchee River. Though rare, the Florida black bear has been spotted in the WEA.

The green anole, the only anole native to the United States, was once very common throughout Florida. Contrary to its name, the green anole is not always green. Though not a true chameleon, this anole can change color from green to gray, brown or tan as it clings to shrubbery or basks on buildings and fence posts. Rarely longer than eight inches from nose to tip of tail, this slender lizard is found in a wide variety of habitats.

Green anoles are agile climbers and are active during the day when they feed on live insects, including insect eggs and pupae. They are, in turn, eaten by birds, snakes, cats and occasionally other lizards. As a defense, the anole’s tail breaks off easily and continues to thrash about for a short while, distracting predators and giving the anole time to escape. The tail grows back in a few weeks. The males have a dewlap, a distinctive pinkish-red throat flap that they display during courtship and territorial displays. In May and June, females lay one or two small leathery eggs and bury them in moist soil or leaf litter. Hatchlings about 2.5 inches long emerge in approximately six weeks.

About 120 years ago, a Caribbean lizard called the Cuban brown anole began to successfully colonize in Florida and Mexico. Today, this nonnative lizard is very common in south Florida and is expanding its range into other southeastern states. The brown anole is similar in size to the green anole, but is never green. Its other distinguishing features include darker spots or bands and a light stripe down the center of the back. The two species share diet and habitat preferences, and scientists are studying the effects of the brown anole on the native green anole populations. 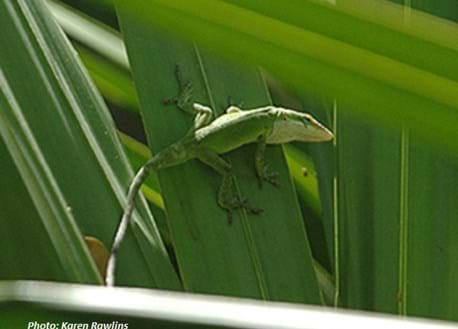