Wildlife is abundant throughout the Big Bend WMA and includes a wide variety of birds, mammals, reptiles, amphibians, fish and invertebrates, all supported by well-managed habitats. Some particularly productive wildlife viewing spots at Tide Swamp and Hickory Mound are highlighted in the Great Florida Birding and Wildlife Trail. Viewing towers and platforms enhance the experience for visitors, and roads and trails access diverse habitats. Birders regularly see shorebirds, herons and egrets, waterfowl, rails and raptors. The area is renowned among butterfly enthusiasts for the variety and sheer numbers of butterflies spotted on seasonal wildflowers, particularly in the summer and fall.

Check out other species recorded from Big Bend WMA, or add observations of your own, by visiting the Big Bend WMA Nature Trackers project.

Add your bird observations to the following eBird Hotspots:

One of the most abundant and characteristic birds throughout the Big Bend coastal region is the clapper rail, or marsh hen. Although so abundant it is considered a game bird, the secretive marsh hen is seldom hunted or even seen in the coastal salt marshes where it lives. Clappers are the most vocal bird in the region, emitting a harsh, clattering call day or night that may start a chorus of grating responses. The clapper rail is gray-brown while the king rail is more rusty in coloration.

In Birds of America (1842), Audubon described the secretive nature of the rail: "On the least appearance of danger, they lower the head, stretch out the neck, and move off with incomparable speed, always in perfect silence. They have the power of compressing their body to such a degree as frequently to force a passage between two stems so close that one could hardly believe it possible for them to squeeze themselves through." The expression "thin as a rail" is well founded. The breasts of their thin bodies may measure just over an inch. 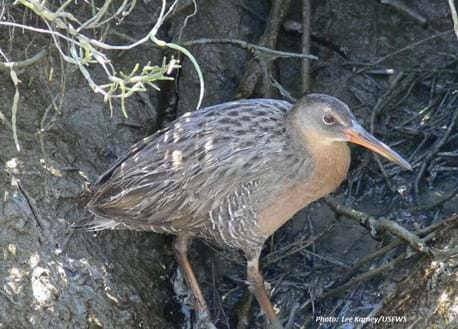