The diverse mix of wetlands and uplands, and location along Lake Seminole and the Chattahoochee River provides excellent wildlife habitat. Nesting ospreys are regularly spotted. Watch for wintering waterfowl and a year-round variety of wading birds. Mississippi and swallow-tailed kites are among the birds that can be seen in the summer. The high-quality longleaf pine uplands are home to gopher tortoises, white-tailed deer, fox squirrels, wild turkeys, northern bobwhites, Bachman’s sparrows and brown-headed nuthatches. Seasonal wildflowers attract butterflies such as the zebra swallowtail, common buckeye and Gulf fritillary. Over 150 wood duck nest boxes are maintained on the area.

Check out other species recorded from Apalachee WMA, or add observations of your own, by visiting the Apalachee WMA Nature Trackers project.

Update your bird sightings to the Apalachee WMA eBird Hotspot.

The northern bobwhite, sometimes called bobwhite quail, is one of the signature species of upland longleaf pine forests. Visitors to these habitats can expect to hear the males make their tell-tale whistled call – bobwhite – and it is not uncommon to be surprised by a sudden explosion of birds as a covey (flock) of quail flushes from a brushy area.

The northern bobwhite is a medium-sized, round-bodied bird with a short tail and neck. Plumage is reddish-brown with streaking on the sides. Males have a black-and-white face pattern; in females it is black-and-buff.

Bobwhites feed and roost in flocks of 8 to 25 birds. They hunt on the ground in search of fruits, seeds, insects and plant parts. Females lay 12 to 16 eggs in a shallow nest built on the ground and hidden beneath vegetation.

Northern bobwhites occur throughout Florida in mature upland forests, fallow agricultural fields dominated by such species as ragweed and the edges of cultivated grain fields. The best habitat is a mix of agricultural areas (without excessive weed control) interspersed throughout regularly burned mature pine forest. At one time, this was a very common habitat in Florida and abundant quail populations were a by-product of an extensive land use pattern in Florida. This is not the case today and quail occur in significant numbers only on those lands which are intensively managed to replicate the land use patterns described above. 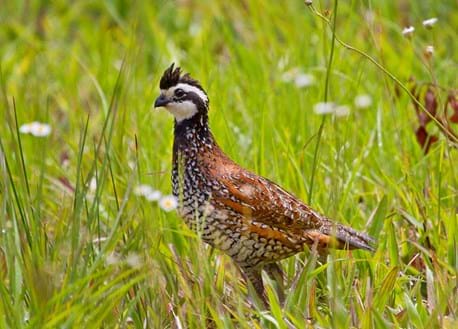