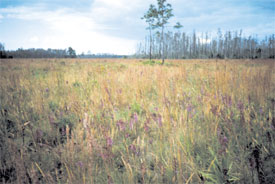 Upper Hillsborough WMA consists of more than 5,000 acres on either side of the Hillsborough River in Polk and Pasco counties 2.5 miles east of Zephyrhills on CR 54. Most of the uplands are slash and longleaf pine flatwoods with an understory of palmetto and gallberry. Swamps are found along the river. Only primitive weapons (archery equipment and muzzleloaders) are permitted during the deer seasons.  Only shotguns and centerfire handguns are allowed during the wild hog-dog season. Only shotguns are permitted during the small game season. There is also a spring turkey season. The most popular area with bicyclists and horseback riders is the unpaved loop road south of CR 54 through pine flatwoods. Spurs off this road provide additional access for hikers and hunters. Wildlife that make their home on the area include white-tailed deer, northern bobwhite, armadillo, gray squirrels, feral hogs, and a variety of birds. There are no bridges at Hillsborough River crossings and these areas will be wet or flooded. Horses are prohibited during hunting seasons and are permitted at other times with written permission from Southwest Florida Water Management District.  Children under the age of 16 are required to wear a helmet when horseback riding on public lands.  For more detailed information go to Nicole's Law.  All horseback riders must have proof of current negative Coggins Test results for their horses when on state lands. Camping is permitted at designated campsites during hunting periods and at other times with written permission from the Southwest Florida Water Management District. There are no boat ramps on this area.