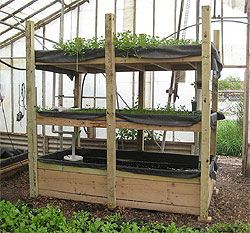 Aquaponics combines aquaculture (raising aquatic species) and hydroponics (growing plants in water) and can be a commercial or private venture.

Interest in private home aquaponics systems is increasing, and Floridians should be aware of the regulations that pertain to personal aquaponics projects.

Aquatic species that are left over from aquaponics projects may not be released into Florida waters.  It's illegal to release any nonnative species in Florida.

Permits to use aquaponics for producing food

For production and sale of aquatic animals (fish, crayfish, prawns) by commercial businesses or private individuals

For personal use only (no sales of aquatic animals)

Links to other resources