The development of Deer Management Units (DMUs) in Florida was the result statewide public input and is a major component of the Strategic Plan for Deer Management in Florida. Stakeholder technical assistance groups (TAGs) were created to help understand public preferences and guide management recommendations. Responsive Management conducted a statewide randomized telephone survey of hunters, farmers, and the general public. This survey was the most comprehensive source of information ever compiled on public attitudes and opinions towards deer, deer management, and deer hunting regulations in Florida. For more information regarding the results of the telephone survey and TAG reports, please see the links below:

The end result of this process was the development of 12 DMUs with unique antler point and antlerless season regulations based on local habitat quality, deer herd characteristics, and hunter preferences. The following antler point regulations and antlerless season dates took effect for the 2015-2016 hunting season. For season dates and bag limits on wildlife management areas (WMAs), please refer to the WMA brochures page.

A1 –The northern boundary begins in Clewiston and runs east along U.S. 27 to S.R. 80 and east along C.R. 880 to U.S. 441/U.S. 98/S.R. 80 east to the Atlantic Ocean.  The line then turns south and follows the coast to the southeastern corner of Dade County.  It then continues along the western boundary of the Dade County line north till its intersection with the southern boundary of Big Cypress WMA.  It then follows the eastern boundary of Big Cypress WMA north to Interstate 75, then turns east along Interstate 75 to Government Road/C.R. 833 and follows Government Road/C.R. 833 north to C.R. 835 and north along C.R. 835 to Clewiston. 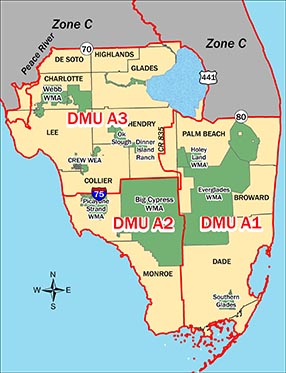 A3 –The northern boundary begins at the Gulf of Mexico and runs northeast through Charlotte Harbor and up the Peace River until it intersects with S.R. 70.  The line then becomes S.R. 70, running east until it meets U.S. 441 north of Lake Okeechobee.  It then follows U.S. 441 south, where it proceeds around the eastern shore of Lake Okeechobee and turns east on S.R 80 to U.S 27 east to C.R. 835 where it runs south to Government Road/C.R. 833 and continues south to Interstate 75.  The line then follows Interstate 75 east to Golden Gate Parkway and continues on Golden Gate Parkway east to the Gulf of Mexico.  The line then turns north and follows the coast to Charlotte Harbor. 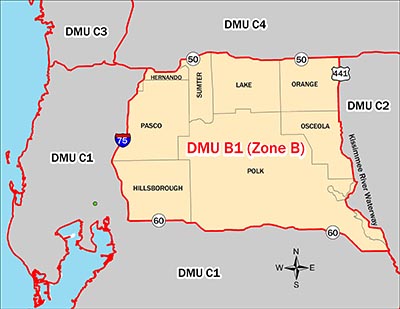 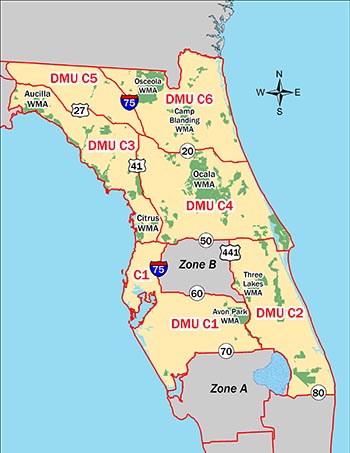 C1 –The western boundary is the Gulf of Mexico.  The northern boundary is Hwy 50 then it turns south and follows Interstate 75 to Hwy 60.  It turns east on Hwy 50 to its intersection with the Kissimmee River.  It follows the Kissimmee River south to S.R. 70.  It then follows S.R. 70 west to the Peace River.  Then it follows the Peace River and the Charlotte Harbor to the Gulf of Mexico.

C2 – The western boundary follows U.S. 441 south to the Kissimmee River Waterway.  The northern boundary is Hwy 50 to U.S. 1; south on U.S. 1 till it follows the Bennett Causeway/Hwy 528/Hwy A1A east to the Atlantic Ocean.  The eastern boundary is the Atlantic Ocean.  The southern boundary follows S.R. 70, running east until it meets U.S. 441 north of Lake Okeechobee; it then follows U.S. 441 south, where it proceeds around the eastern shore of Lake Okeechobee; the line then turns off U.S. 441 and onto S.R. 80 and runs just a few miles before turning east and becoming County Road 880, running just a few miles before joining back up with U.S. 98/441/S.R. 80/Southern Blvd., where it continues east all the way to the Atlantic Ocean.

C3 –The western boundary is Hwy 61 south to U.S. 319 to U.S Hwy 98, east along U.S. 98 to the Wakulla River, south along the river to St. Marks River and on to the Gulf of Mexico.  The northern/eastern boundary begins in Tallahassee on U.S. 19/27 to Perry where it follows U.S. 27 to High Springs then turns south along U.S. 27/41 till Brooksville where it then turns west along Hwy 50 and then onto Bayport and the Gulf of Mexico. 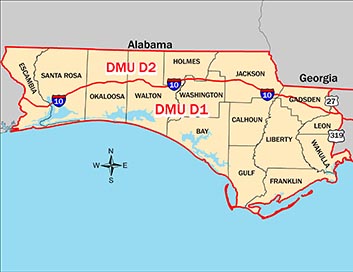