How to Identify a Gopher Tortoise

Gopher tortoises are often misidentified. Learn how to identify our only native tortoise with our guide below. 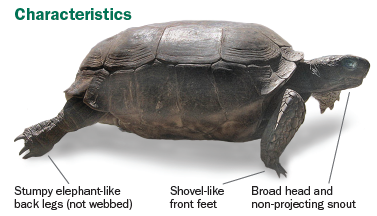 Gopher tortoises have stumpy elephant-like back legs which are not webbed. Their front feet are shaped like shovels for digging burrows. Gopher tortoises also have a special bony plate on the front of their shells directly behind the head. This plate is called a nuchal scute.

Gopher Tortoises go through four stages during their life cycles: Hatchling, Juvenile, Sub-adult, and Adult. We determine what stage they are in primarily by measuring how long the top of their shell is, which we call the carapace length. Their appearance also changes as they age.

After the tortoise passes the juvenile stage, a tortoise becomes a sub-adult until it reaches sexual maturity. Subadults range from about 5” (130 mm) to 7” (180 mm) in carapace length. A subadult gopher tortoise’s shell is hardening and will be more uniform in coloring than a juvenile tortoise shell. Their skin is dark.

Gopher tortoises are considered adults when they can reproduce. This can take as long as 10-20 years. Adults have a carapace length over 7” (180 mm), a uniformly gray to brown hardened shell, and dark skin.

Florida’s native and nonnative turtle species are commonly misidentified as gopher tortoises. You can tell these other species apart from gopher tortoises by looking for the characteristics listed here in our guide.

Aquatic turtles have webbed feet to help them swim. In contrast, gopher tortoise feet are designed for digging in sandy environments and are not webbed.

While Florida has only one native tortoise species, several nonnative tortoise species are found in Florida. The sulcata tortoise, also called an African spurred tortoise) is the most encountered. This exotic species has a flared outer shell and large forearm spurs. They also lack the bony plate (nuchal scute) found on the shell directly behind the head of gopher tortoises.