The Sanibel Island rice rat can reach a length of 10.1 inches (25.7 centimeters) and a weight up to 2.5 ounces (70.9 grams). This species has brownish fur on their dorsal (back) side, a dark white belly, white feet, and a tail that is brown on top and white on the bottom (Florida Natural Areas Inventory 2001). 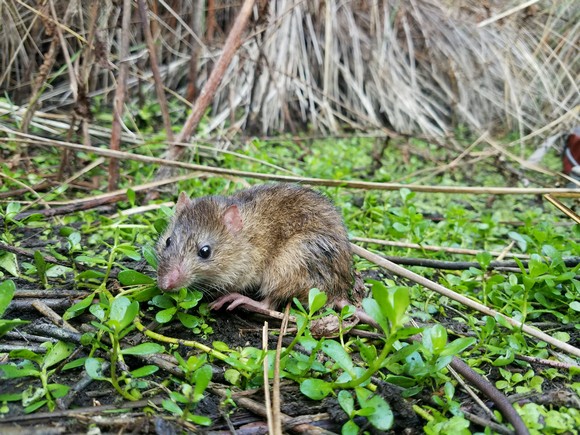 Very little information is available about the life history of the Sanibel Island  rice rat, so information is summarized from the similar marsh rice rat, Oryzomys palustris.  Rice rats feed primarily on animals such as insects, crabs, and snails, but they will also eat plants such as various species of marsh grasses.  This species is primarily nocturnal and have large home-ranges. (U.S. Fish and Wildlife Service 1999)

Rice rats can breed throughout the year.  Females carry the young for 21 to 28 days before giving birth.  The average litter size is around four or five and the juveniles weigh between 0.11 and 0.14 ounces (3.1-4 grams).  Females will begin weaning their young sometime between 11 and 20 days, with sexual maturity reached between the ages of 50 to 60 days old (Wolfe 1982).  Rice rats usually live less than a year in the wild. 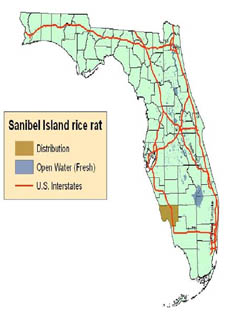 Marsh rice ratsare semi-aquatic and can be found in coastal marshes, hydric hammocks, swamps, and freshwater marshes and meadows. The Sanibel Island rice rat is a subspecies of the rice rat and is found only on Sanibel Island, Florida.

The main threats to the Sanibel Island rice rat are habitat loss, degradation (quality of habitat decreased), and fragmentation (division of a habitat to smaller separate habitats); predation by free-ranging cats; and competition with black rats. Urbanization is also a problem as it prevents the use of prescribed fire to control upland vegetation encroaching into its wetland habitat. Global climate change and sea level rise are an impending threat as wetland habitats may incur a tremendous influx of salt water. Because the Sanibel Island rice rat is found in such a small geographic area, hurricanes and tropical storms also pose a threat to the subspecies.

The Sanibel Island rice rat is protected as a State-designated Threatened species by Florida’s Endangered and Threatened Species Rule.

Learn more about how you can live with and conserve beach mice.