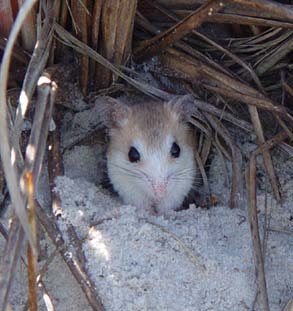 Beach mice inhabit coastal dunes in the panhandle and along the Atlantic coast of Florida. Development of coastal areas has caused a loss of habitat for beach mice and other plants and animals that live in the dunes. Due to this loss of habitat, five of the six subspecies of beach mice found in Florida are state and federally listed as either endangered or threatened. Human activities such as walking in dunes, bringing pets into the dunes, and removing native vegetation also lead to the loss of habitat and the fragmentation of remaining habitat. Not only does protecting the dunes help to protect beach mice, it also protects the people and structures near the coasts from the effects of hurricanes.

Eight things you can do to help beach mice