The Florida grasshopper sparrow is a small bird that can reach a length of five inches (13 centimeters) with a wingspan of eight inches (20 centimeters) (Smithsonian National Zoological Park, n.d.).  This species is drab colored with a pale median stripe on top of its flattened head, and a light brown breast.

From late March to July, males sing from perches on shrubs and grasses to maintain their breeding territories.  The primary song consists of two or three weak introductory notes followed by an insect like “buzz”.  A less frequent secondary song is a sustained rambling warble.  Adults are sedentary, using the same territory during successive years.  Nests are made of grass and are dome shaped and are usually located in a slight depression in the ground, well-concealed by clumps of dwarf live oak, wire grass, or saw palmetto.  Grasshopper sparrows are bimodal breeders – they breed throughout the year (Vickery 1996).  Three to five eggs are laid and then incubated for 11-12 days by both parents.  Grasshopper sparrow eggs are creamy white with reddish-brown spots on the large end.  Young grasshopper sparrows are nurtured upon hatching for about eight days.  A second or third nesting attempt may be made within the breeding season. 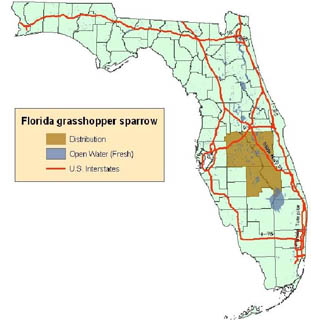 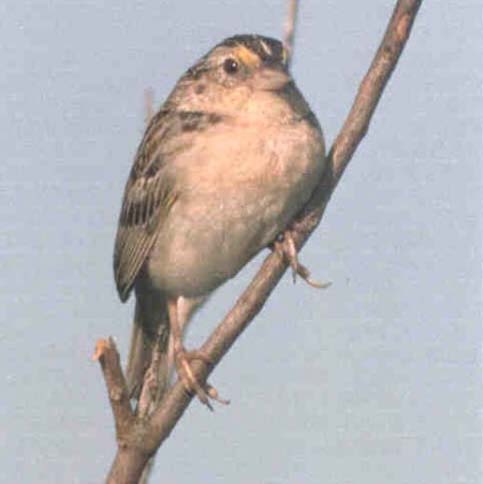 The main threats to the Florida grasshopper sparrow are habitat destruction, degradation, and fragmentation.  The conversion of open prairie habitat to agriculture fields has caused destruction of available habitats for the grasshopper sparrow (Seattle Audubon Society, n.d.).  Conversion to agriculture fields can also cause fragmentation to their habitat.  Prescribed burning plays a key role in supporting the grasshopper sparrow’s habitat, as it prevents their nesting areas from becoming overgrown and obstructs the invasion of woody plants (U.S. Fish & Wildlife Service, n.d.).  Overgrown vegetation and the habitat invasion from woody plants degrades their open prairie habitat.  A change in hydrological regimes also threatens the grasshopper sparrow, as excessive water can prevent normal reproduction during the nesting season (U.S. Fish & Wildlife Service, n.d.).