The black skimmer is a seabird with defining physical characteristics that make it easily distinguishable from others.  The key physical feature of the skimmer is its large red and black bill.  The bill begins to widen at the top and gradually becomes smaller as it forms a sharp tip at the end of the bill.  The lower part of the bill is longer than the top, which is important because they use their bill to skim along the top of the water to catch fish, for which they are aptly named.  Skimmers can reach a height of 19.7 inches (50 centimeters) with a wingspan of 3 to 3.5 feet (.9-1.1 meters) (The Cornell Lab of Ornithology 2011, E. Sachs pers. comm. 2011).  Skimmers have a black back, black wings with white edging, and a white belly and head.

Adult plumage is black above, white below and this striking combination, coupled with the brightly colored bill, makes it easy to spot the birds as they hunt over the water or loaf on the beach with other seabirds and shorebirds.

The diet of the black skimmer primarily consists of fish.  The skimmer has a unique style of feeding that involves literally “skimming” the surface of the water with their lower bill.  When they contact a prey item, they quickly bend their head forward and snap the upper bill closed, seizing their prey.

Breeding occurs during the summer, generally between May and early September (Katja Schulz, n.d.).  Skimmers nest on the sand along beaches, sandbars, and islands developed by dredged-up material.  Nesting occurs in colonies consisting of one to several hundred pairs of skimmers.  Skimmers are protective of their nests and offspring and will utilize group mobbing to protect the nests.  Skimmers usually lay three to five eggs per nest and eggs are incubated by both parents for approximately 23-25 days (The Cornell Lab of Ornithology 2011).  Each parent incubates the eggs for up to four hours at a time (Gochfield and Burger, 1994).  Once hatched, parents guard the offspring until they are able to fly at about 28-30 days old (Katja Schulz, n.d.). 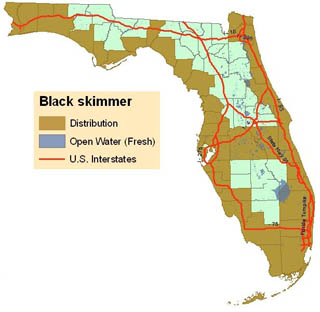 The black skimmer inhabits coastal areas in Florida such as estuaries, beaches, and sandbars.  Skimmers can be found from the coasts of the northeastern U.S., down to Mexico, and over to the Gulf Coast of Florida.  Breeding range is from Southern California, down to Ecuador.

The black skimmer faces many threats as the human population increases and spreads to previously undeveloped coasts.  Habitat loss due to coastal development is the main threat to the species.  People are relocating to the coasts at unprecedented levels causing increased development and traffic on the beaches, as well as increased predators; all of which are detrimental to skimmer habitat.  Predators will feed on skimmer eggs and chicks and include species such as raccoons, crows, opossums, feral hogs, and coyotes.  Because skimmers nest on the beach and are colonial they are extremely vulnerable to disturbance by people, pets, and predators.  Other threats include recreational activity, beach driving, shoreline hardening, mechanical raking, oil spills, and increased presence of domestic animals, all of which may prevent or disrupt nesting or result in the death or abandonment of eggs and young.  Global climate change is an impending threat to the black skimmer.  Sea level rise may cause destruction to primary nesting areas, resulting in a decreased population size.

The black skimmer is protected by the U.S. Migratory Bird Treaty Act.  It is also protected as a State Threatened by Florida’s Endangered and Threatened Species Rule.

Because of their high degree of sensitivity to disturbance and the intensity of recreational use of Florida’s beaches, most colonies in Florida would fail without management.  All documented colonies of black skimmers in Florida are managed to some degree, usually involving the posting of informational signs and symbolic fencing.  Much of this effort is undertaken by volunteers or local land managers.

The Cornell Lab of Ornithology. (2011). Black Skimmer. Retrieved March 14, 2011, from All About Birds: http://www.allaboutbirds.org/guide/Black_Skimmer/id