Read the peer-reviewed article with the final results of this study.

The Florida black bear (Ursus americanus floridanus) historically occurred throughout the state but was reduced to an estimated 300–500 bears in the 1970s due to loss of habitat and unregulated hunting.  As a result, the Florida Fish and Wildlife Conservation Commission (FWC) classified the black bear as a Threatened Species throughout most counties in 1974.

In 2011, FWC conducted an evaluation of species listed as State Threatened using criteria developed by the International Union for Conservation of Nature (IUCN).  The Florida black bear was found not to be at high risk of extinction, and was therefore recommended to be removed from the state list.  As part of the removal process, the Florida Black Bear Management Plan was developed and approved.  The goal of the plan is to manage the black bear so that it never meets the criteria of a threatened species again.  One of the high ranking priority needs in the Management Plan is to estimate bear numbers every 10 years.  The last estimate of bear numbers for the 5 largest subpopulations in Florida of about 2,600 bears was done in 2002 and, therefore, the FWC conducted a two-year study in 2014-2015 to estimate bear numbers.

HOW WE ESTIMATED BEAR NUMBERS

Today, bear range in Florida is comprised of seven distinct subpopulations each assigned to its own Bear Management Unit (BMU) (i.e., Apalachicola in the East Panhandle BMU, Eglin in the West Panhandle BMU, Osceola in the North BMU, Ocala/St. Johns in the Central BMU, Chassahowitzka in the Big Bend BMU, Highlands/Glades in the South Central BMU, and Big Cypress in the South BMU.  Some of these subpopulations are small and are impacted to various degrees by habitat fragmentation which restricts movements and genetic exchange.  Other subpopulations have increased noticeably.

A key component of sound conservation and management of bears is knowing how many bears live in each subpopulation.  However, bears are generally secretive, live in dense vegetation, exist at low densities, lack distinguishing characteristics, and wander over large areas; characteristics that make a direct count of bears impossible.  Instead, the FWC used a common method to statistically but indirectly estimate bear numbers known as mark-recapture.  To illustrate this method, imagine a large bucket of red marbles for which we need to estimate the number.  The only marbles visible are the ones on the surface so a direct count is not possible. However, if we removed – say 100 marbles, marked them with white paint, put them all back in the bucket and shook up the bucket we could remove a second sample of marbles – say 100 marbles, some of which would likely be marked white – say 10 in this example.  By observing the proportion of white (marked) marbles in the second sample (10 or 10%) we could estimate the proportion of marked marbles (100) in the bucket to unmarked marbles in the bucket (1,000 in this case).  The estimate may be off the true number somewhat on the first attempt but if repeated enough times, the average of the estimates will get closer and closer to the actual number.  This, in a nutshell, is how we estimated bear numbers. We attracted bears to a small barbed wire enclosure known as a hair snare, obtained tufts of hair left behind, and analyzed the DNA in the hair follicles to identify individual bears.  These were our “marked” bears. We repeated this process six times in June and July, breeding season for bears, a period of time when bears are normally active. Then with the help of some sophisticated population models that incorporated the probability that a bear was detected, certain bear home range characteristics, behavioral differences among bears, and habitat types surrounding the hair snare, we generated population and density estimates for bears in the Osceola and Ocala/St. Johns subpopulations in 2014 and the Eglin, Apalachicola, and Big Cypress subpopulations in 2015.

Our results indicate bear numbers have increased considerably since 2002, having increased nearly 90% in the Apalachicola and Osceola subpopulations and with significant growth in the other subpopulations we measured.

Below is the average number of Florida black bears in five subpopulations from 2002 and 2014-2015 estimates. Bear numbers are rounded to the nearest 10 bears.

Much of the increase we documented occurred from range expansion by bears since the 2002 estimate.  Bears are now abundant or common in approximately 45% of Florida. This represents a significant increase in range since 1993 when FWC estimated bears occupied 17% of Florida.  The updated range map can be seen below and you may also view the map with a detailed description. 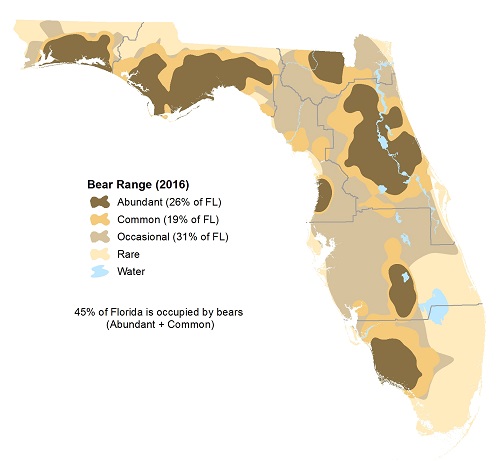