Satellite telemetry is a powerful research tool that helps scientists understand how highly migratory animals interact with their environment. Sea turtle researchers use satellite telemetry to reconstruct long-distance sea turtle migrations and to describe the resident areas used by these animals. With telemetry, scientists can learn how far sea turtles travel, how fast they swim during migration, what routes they follow, and more. Researchers are also using this technology to determine whether sea turtles use environmental cues (such as ocean currents) as navigational aids during migration. Data collected during these studies often indicate long-term periods of residency in distinct foraging habitats.

Satellite telemetry allows researchers to track the movement of an animal by using orbiting satellites that detect signals emitted from a transmitter attached to the animal. On the carapace (top shell) of hard-shelled sea turtles, transmitters are attached with epoxy or fiberglass and resin. The attachment methods are designed to be harmless and are constantly being improved to ensure the health and safety of the animals being tracked.

Success of this technique depends on the satellites' ability to receive the radio signals from the transmitters. However, signals are not transmitted when the transmitter is underwater and cannot be received if the satellites are not within range. Each transmitter has a sensor that detects when the unit is above water and acts as the unit's "on/off" switch. Switching off while underwater preserves the battery by allowing transmissions only when the unit is above water and capable of communicating with satellites. Typically, a sea turtle's transmitter will be above water only when the turtle surfaces to breathe. This limitation is one of the main factors influencing the amount and accuracy of these positional data.

The distance between the transmitter and the satellites is calculated based on the transmitter signals, and the location of the transmitter on the ground is geometrically determined. Transmitters that have GPS receivers can collect more precise positional information than those derived from the radio frequencies alone. Transmitters can be equipped with additional sensors that measure depth, temperature, and light. Successful transmissions are relayed from the satellites to receiving stations on the ground where the data are processed and then provided daily to researchers via the internet. Researchers typically receive several locations each day, but this may decrease to several per week as the transmitter battery begins to expire. Such detailed information allows scientists to track telemetered animals daily and obtain clues about their behavior throughout migratory journeys.

During the summer of 2010, in collaboration with Dr. Tony Tucker of Mote Marine Laboratory, five satellite transmitters were deployed on adult female loggerheads that had nested on Casey Key Beach, Sarasota County, Florida. The information they gather supplements a larger dataset that will help describe the habitat preferences of loggerhead sea turtles in the Gulf of Mexico and surrounding waters. These transmitters have GPS receivers as well as sensors that describe the sea turtles' diving behavior and foraging habits. Satellite telemetry data from these transmitters are presented in near-real time on SeaTurtle.org. 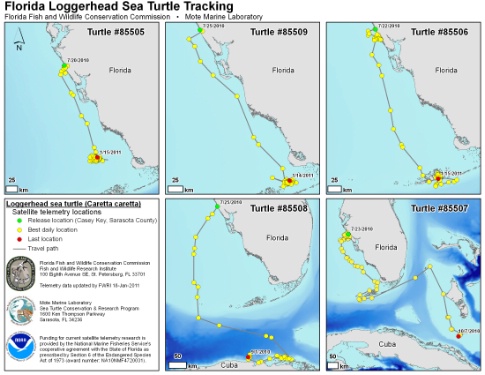 Funding for current satellite telemetry research is provided by the National Marine Fisheries Service's cooperative agreement with the State of Florida as prescribed by Section 6 of the Endangered Species Act of 1973 (award number: NA10NMF4720031).