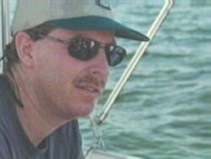 Allen Foley, assistant research scientist with FWRI, was interviewed by the Teaching Learning Network for a video about endangered species in Florida. The following transcript was taken from the complete, uncut interview, conducted on Florida Bay while his fellow researchers measured and tagged a captured loggerhead in the boat behind him.

Q. What did you catch here, and what is the purpose of this?
A. Well this is an adult male loggerhead, and what we're doing out here is learning more about the turtles that live in Florida Bay. We go out and catch the turtles that we can catch and bring them aboard and learn about what species they are, what size they are and whether they're male or female. We take blood to determine their health status and also to determine what we call their "genetic identity," which tells us what nesting beach they're from. So it's really to learn more about turtles in Florida.

This turtle behind us is an adult male loggerhead that we've captured before. We captured it last year, and it actually had some extra research tools that were attached to it. There was a box on it earlier that was a satellite transmitter, and that allowed us to follow the movements of the turtle when we weren't here. The satellite transmitter would send signals to a satellite orbiting overhead which would send a signal to a company that plots a latitude and longitude for the turtle and sends it to us.

Q. Why collect all this data? What's the purpose?
A. It's important for us to know about turtles in Florida so that we can make sure we're not conducting activities that are making it tough for turtles to survive in Florida. If we know what kind of turtles are living here, what sizes are living here, where they're living, and we can also learn about what problems they encounter. For example, this one has propeller injuries on its shell. We see how many turtles are hit by boats and what type of injuries they sustain. We also learn about their health so we know more about the possible diseases they're facing. It just allows us to learn about how turtles are doing in Florida so that we can do things to help their populations recover.

Q. Are they endangered?
A. Yes, all of the species of sea turtles in Florida are either endangered or threatened under the Endangered Species Act. This species that's behind us, the loggerhead, is threatened, and the other species that live here in Florida Bay are endangered. We also catch green turtles here and hawksbills and Kemp's ridleys. Living offshore of Florida - not in this bay but in Florida nonetheless - are leatherbacks. So we have five species of sea turtles, four endangered and one threatened, all of them under the Endangered Species Act and all facing population declines and all animals that we need to learn more about so we can make sure that they are on the way to recovery and not to extinction.

Q. How many eggs does a female lay?
A. About 100 to 120 on average. They can nest six or seven times per season. The average is about three or four.

Q. Such as?
A. Well, for example, if we know that many turtles are entangled in fishing line and that those cause bad injuries to turtles, we can try to increase public awareness about not discarding fishing line, about having cleanups to move fishing line from the environment to try to reduce the incidents of entanglement. If we know that a lot of turtles are hit by boats, we can try to do more to educate boaters about being careful of turtles and learning more about where turtle live so we can concentrate efforts on where boaters and turtles might interact the most.

Q. Why have they become endangered?
A. It's almost certainly due to a variety of reasons. They've lost a lot of habitat. Our building on beaches, our dredging of waterways, our destruction of areas where they breed and where they lay eggs, a lot die in fishery interactions, in the past a lot were killed directly in fisheries before they were protected. And even out in the water they still encounter man even when man's not there. There's a lot of pollution that they encounter that causes different problems for them.

Q. Tell us a little bit about the night nesting.
A. Well in Florida each summer we host probably the largest loggerhead nesting group in the world. Each year we get about 60-80,000 loggerhead nests in Florida. From May through September mostly loggerheads are nesting on our beaches each night - on all the sandy beaches throughout Florida from Northeast Florida down to Keys all the way up to the Panhandle.

Q. There are a lot of activities around the country with public volunteers trying to help save turtles. Why do you think that is? What is it about the turtle that people seem to fall in love with?
A. It's hard to say. Probably every person you ask would have a different reason why they like turtles. In general it's probably because it's a large animal, and it has a really cute face and other things like that.

Q. Are you surprised at how much public support there has been to save the turtles?
A. No I guess I hadn't even thought about that. I like turtles, and it just seems like a natural thing. I think what it probably is is pretty much everyone as a child has a little pet turtle - not a sea turtle of course - but people connect early with turtles. There's a lot of children's stories that have turtles, and I think kids right away, especially because a turtle is a little bit different than other animals at least different looking with the shell, the house that it carries on its back that everyone learns about. So I think people connect early with turtles specifically and that probably stays with them throughout their life.

Q. Do you know what impact the FWC or FWRI has had in protecting and replenishing the supply? Have you been able to track any programs to see if they're successful?
A. Really it involves a cooperative effort worldwide. If one group in one place is the only place protecting sea turtles then nothing will happen. Sea turtles are wide-ranging animals. They spend part of their life in one place, they move to another place for another part of their life, and over their lifetime live in many countries or spend time in many countries. So really it's a worldwide, cooperative effort, and fortunately we have a lot of organizations a lot of agencies all around the world that work to protect the turtles when the turtles are living in their area. So no matter what we did here, if people weren't doing the same thing in other places, then we would have no effect. Even in Florida it's an effort between the state and the federal government and between a lot of different conservation organizations and a lot of other people.

Q. Has the population increased significantly?
A. We're still battling. There might be some increases in some times and some places and some decreases. It's really hard to get a handle on these types of animals because they do spend different parts of their lives in different areas, and you can't just go out and count them and feel certain you know today how many there are and next year how many there are and the year after, so we really just get little snapshots that might just tell us something that's happening at that time and that place but overall we probably are at least holding our own with their population numbers and may be seeing some increases but probably still also seeing some decreases. We just always have to keep a really close eye on them.

Q.So what's the biggest threat facing sea turtles today?
A. In the United States in the past it was direct killing of turtles. People would go out and kill turtles for food, take eggs for food, and that was probably the biggest impact. Today those things are easier to fight because you see a picture of someone going out and killing a turtle with a machete, and that type of action is easy to get public support to be against that type of activity. Mostly what happens today is turtles are killed indirectly. The people that are killing turtles don't mean to kill turtles. They're doing something else, and their activity is incidentally causing turtles to die. People are building on their property, and that's taking nesting habitat or taking habitat in the water where turtles find food. People are fishing to feed their families, and their fishing activities are either killing turtles at the time or some of the nets that they lose are killing turtles.

So what's happening today is people are doing other things, and turtles are getting killed incidental to that activity. When you work to try to reduce that you also interfere with people's livlihoods, and that causes a lot of mixed feelings among different people. So it's more difficult to deal with things like that because you get into private property issues and people's right to utilize different aspects of resource issues.

Q. What can the public do to help save sea turtles?
A. The best thing is for people to learn as much as they can about turtles. To know what things affect turtles and what things individual people do that affect turtles, such as throwing garbage in the water (not only affects turtles but also other animals). Just simple things like disposing garbage properly, not leaving fishing line in the water and people that own property where turtles are sometimes found, like on beaches, learning about how their activities on their property adversely affect the turtles that might sometimes come to their beaches. For example, beachfront lighting, learning that hatchlings are more attracted to artificial light than to the natural light that leads them to the water and learning how to adjust their light so it doesn't have a bad affect on the hatchlings.